Accessibility links
Hurricane Katrina Prompts Growth in Gun Ownership The National Rifle Association is using the experience of Hurricane Katrina to document the importance of guns during a disaster. During the chaos in New Orleans post-Katrina, gun purchases by both civilians and law enforcement swelled.

The National Rifle Association is using the experience of Hurricane Katrina to document the importance of guns during a disaster. During the chaos in New Orleans post-Katrina, gun purchases by both civilians and law enforcement swelled. 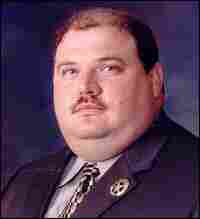 Expecting civil unrest in the wake of Hurricane Katrina, Westwego Police Chief Dwayne Munch sent officers to buy bigger guns. They came back with $18,000 worth of new weaponry, including riot shotguns and Tasers. City of Westwego, La. hide caption

Guns became a prized commodity in the wake of Hurricane Katrina when New Orleans descended into lawlessness. Police sought additional firearms to put down anarchy. Many civilians wanted guns for personal protection, buying and sometimes stealing them. Some of the accounts of civil unrest that prompted the scramble for firepower have turned out to be false. But as NPR's John Burnett reports, the rumors have taken on a new life.

And now for the new battle cry of the Second Amendment crowd: `Remember New Orleans.' No one would have wished such a calamity on an American city, but the picture of a dead 911 system, an imploded police force and thousands of citizens protecting their property with a Glock or a Winchester has been too much for the National Rifle Association to pass up. The NRA has dispatched film crews to New Orleans to interview gun owners so the organization can tell their story to America, says NRA Executive Vice President Wayne LaPierre.

Mr. WAYNE LaPIERRE (Executive Vice President, National Rifle Association): I mean, the truth is never again can some politician look you in the eye and say with a straight face, `You don't need a firearm because the government is going to be there to protect you.' All you have to say is, `Remember New Orleans.' You know, is the Second Amendment really relevant in the 21st century? `Remember New Orleans!'

BURNETT: In the chaotic days after the great cyclone, many citizens did go for their guns.

Mr. CHARLES CLAYSON(ph) (River Pilot): An armed society is a peaceful society. If we didn't have a means to protect ourselves, I don't know if I'd have stayed here, you know. I might have gotten out.

BURNETT: Charles Clayson is a second-generation river pilot who lives in a handsome French country-style home near a bend in the levee in Algiers. After the storm, Clayson grew concerned about reports he heard on the radio of looting across the river in New Orleans. He and a group of other ships' pilots armed themselves and formed an impromptu neighborhood watch committee. Sitting in the patio behind his house, Clayson remembered one close encounter when he was glad he had his AR-15, the civilian version of the M-16.

Mr. CLAYSON: I was sitting up there on my four-wheeler, and my dog was right there with me. I had the lights on. And some--you could tell they were bad guys--a bunch of junk in the back of their pickup truck--drove down real slow and I kind of made a wave at them; they didn't wave back. They were just looking. They looked angry. And they stopped, turned around, came back and I just made sure that they saw that I was armed. And with that, once they saw that I was armed, they took off.

BURNETT: During the week after Katrina, looting was widespread in New Orleans as people carted off food and consumer goods. Thieves drove trucks down deserted streets, filling them with booty; that fact is incontrovertible. The fear that New Orleans evacuees had begun marauding outside the Crescent City, however, turned out to be groundless rumors, but that didn't stop the gun run. FBI figures show the number of background checks conducted for gun purchases in the state of Louisiana increased fivefold during the four days following Katrina. Even the police went gun crazy.

The West Bank Expressway coming out of New Orleans goes right through the tiny city of Westwego, sandwiched between the Mississippi and the Barataria Swamp.

BURNETT: Rib eyes and baked potatoes were on the menu a few weeks ago when the Westwego Police Department sat down to supper behind the station. There were no businesses open after the storm, so they grilled.

Unidentified Man #3: Can you fix me a plate?

BURNETT: They'll never forget the things they heard coming over the police radio from New Orleans. First, there was the false report of a toxic cloud from a flaming oil storage facility drifting their way. Then there was the report of a pack of looters coming down the expressway headed for Westwego, which also proved to be bogus. It wasn't all gossip, though. Westwego police seized a couple dozen stolen weapons from vehicles passing through on the highway.

Chief DWAYNE "PONCHO" MUNCH (Westwego Police Department): When you start taking guns off the street and when you're looking at the public outgunning the police, and we didn't know what to expect, it's time to go get some more ammunition.

BURNETT: Expecting the worst, Westwego Police Chief Dwayne "Poncho" Munch, a portly ex-Marine with friendly blue eyes, sent officers to Baton Rouge and Lafayette to buy bigger guns. They came back with $18,000 worth of new weaponry that now sits in cardboard boxes in his cluttered office.

(Soundbite of gun being cocked)

Chief MUNCH: And, of course, we bought TASERs.

BURNETT: This is a city that covers one square mile, has 10,000 residents and 40 police officers. Murders are rare; riots unheard of. Today, the Westwego Police Department believes it's ready for anything.

So what are you going to do with all these new guns, Chief?

Chief MUNCH: We've got to put them in a nice big safe until--hopefully never have to use them again. You can never have too much firepower in a police department.

BURNETT: Farther upriver, the state capital of Baton Rouge was in a full-scale panic over rumors that newly arrived New Orleans evacuees were running amuck. On the Thursday after the storm hit, on local TV, all-news radio and e-mail, there were reports of muggings and carjackings, robberies of banks and pharmacies and armed mobs on the streets.

Mr. HAMPTON GRUNEWALD (Mayor's Aide): It was just wild the things that were going on.

BURNETT: Hampton Grunewald, an aide to Mayor Kip Holden, was inside the Emergency Operations Center when he heard a local TV report.

Mr. GRUNEWALD: As we're having a discussion, I hear, `Well, this is just in. The mayor's office in Baton Rouge has been taken over by a gang.' I turned around and looked at the TV. I said, `Huh, that's funny.' None of the stuff that had been reported had happened.

BURNETT: As the rumor mill ground on, Wal-Mart and Academy Sporting Goods shipped their inventory of guns out of Baton Rouge for safekeeping. The city rushed its Special Response Team to the downtown shelter and evacuated the Municipal Building. Louisiana State University locked down their buildings and told people to stay inside. Banks closed early, the mayor denounced New Orleans' thugs--though he later apologized--and jittery citizens flocked to gun stores. They were lined up out the door and into the parking lot at Jim's Firearms waiting as long as four hours to buy a gun. David Reynerson saw the same thing happen inside his story, Bowie Outfitters.

Mr. DAVID REYNERSON (Bowie Outfitters): Almost everything you heard in Baton Rouge was just a rumor. There was no increase in crime. The big increase was in traffic flow. But people started getting scared, and we had a lot of sales for handguns. And it was quite an increase over what we normally sell.

BURNETT: The rumors are over now and police and the National Guard have restored security to most of New Orleans. But when people start returning, they will bring with them the unerasable memory of the total breakdown of law and order, and the new New Orleans may well become one of the most heavily armed cities in America. John Burnett, NPR News.