Accessibility links
Festival Dusts Off Forgotten, Funny Video Co-curators Joe Pickett and Nick Prueher scour dumpsters, flea markets and thrift stores for unwanted and discarded film and video gems -- then they present it, along with their own commentary. 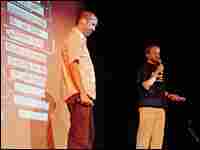 Dumpsters, flea markets and thrift stores can yield entertainment gems, if you're diligent enough about searching for them. Fortunately, Joe Pickett and Nick Prueher have done the work so that others don't have to.

Their Found Footage Festival delivers the good, the bad and the ugly of forgotten film; it's hard to say which category Arnold Schwarzenegger's contribution falls under, but his "travel video" from Rio de Janeiro is among the more memorable.

Clips from the Festival

The now-California governor's long-ago behavior in the video is less than stately, making it the centerpiece of choice for a festival dedicated to reviving moments that may have been better off unfilmed. Pickett and Prueher travel the country screening the films on a stage along with their own comedic commentary. Joel Rose of WHYY reports.