Accessibility links
Poll: Bush's Ratings Drop on Nearly All Fronts A new poll shows President Bush's approval ratings are at an all-time low. Only 38 percent of Americans think he is doing a good job; also, most think Bush will be seen by history as unsuccessful. 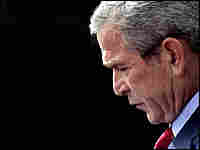 President Bush's approval ratings are in a steep decline, according to a new poll by the Pew Research Center. The survey found that only 38 percent of Americans think the president is doing a good job, down from 50 percent in January. For the first time in his presidency, the numbers show most people think Bush will be judged as an unsuccessful president.

"That's a pretty bleak assessment," said Andrew Kohut, director of the Pew Research Center. "The numbers for President Bush are really going from bad to worse." In September, a Pew poll found that Bush's approval rating dropped as a response to what was considered to be a poor handling of the relief effort for Hurricane Katrina's victims. The latest Pew poll, a national survey of 1,500 adults conducted Oct. 6 to Oct. 10, shows that his numbers are continuing to slip.

The dissatisfaction is reaching into the Republican base. The party still remains loyal, said Kohut, with 80 percent approving of Bush's performance. But that number has dropped from 90 percent earlier in the year. And only 62 percent of Republicans surveyed think Bush will go down in history as a successful president. 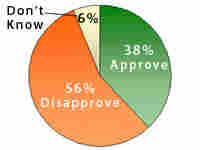 Only 38 percent of Americans currently think Bush is doing a good job, according to the Pew survey. Pew Research Center for the People and the Press hide caption

The poll also examined 11 issues, such as health care, the federal budget deficit, the economy and taxes, asking participants whether Bush had made conditions better or worse. On seven of the issues, most people said Bush's decisions or policies had had a negative impact. Bush only fared well in one area -- national security.

The struggle in Iraq is having a major impact on Bush's numbers, according to Kohut. There was a significant decline since earlier in the year in support for keeping troops in Iraq, and fewer people think Bush made the right decision by engaging in a war there.

Pew Research Center for the People and the Press