Accessibility links
Search for Lost Pets Continues in Louisiana A quarter-million dogs and cats were likely left behind as people evacuated during Hurricane Katrina. Only a fraction have been saved. A dedicated group of volunteers and professionals continues their work to save animals and reunite them with owners.

A quarter-million dogs and cats were likely left behind in New Orleans as people evacuated during Hurricane Katrina. Only a fraction -- maybe 15,000 -- may have been saved. That's in large part because evacuating animals with their owners was not part of the government emergency response plan. 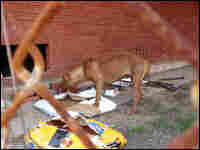 The Louisiana SPCA, its facility destroyed, has been working with organizations such as the Humane Society of the United States and the ASPCA to rescue abandoned animals and get them to safety. Along with a number of other rescue organizations, including Best Friends Animal Society and Noah's Wish, the LSPCA is also trying to reunite pets with their owners.

The challenge is that homeless animals have been shipped to shelters across the country. Web postings have helped some people locate their pets. But for many, it seems an impossible task to track down their missing friends.