Accessibility links
Guatemala Presses on with Grim Hurricane Recovery A week since Hurricane Stan hit Central America, communities across Guatemala continue the task of unearthing victims of mudslides triggered by the storm. At least 600 have died and more than 400 are missing. But a debate rages over what to do with the bodies once they are found.

A week since Hurricane Stan hit Central America, communities across Guatemala continue the task of unearthing victims of mudslides triggered by the storm. At least 600 have died and more than 400 are missing. But a debate rages over what to do with the bodies once they are found. 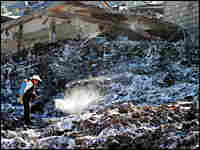 A villager sprays lime on the remains of a hamlet destroyed by a mudslide in Tacana, Guatemala, Oct. 11. Reuters hide caption 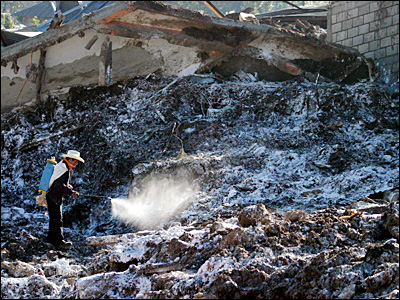 A villager sprays lime on the remains of a hamlet destroyed by a mudslide in Tacana, Guatemala, Oct. 11.

It's been a week since Hurricane Stan hit Central America, bringing days of rain and deadly mudslides. In Guatemala, authorities say 1,000 people are dead or missing and more than 200,000 homes have been destroyed. Lorenda Reddekop visited one of the hardest-hit areas and sent this report.

Most rescue efforts have been focused on Panabaj. A massive mudslide buried the community and killed an estimated 400 people. The mud is still wet more than a week after the storm. Where houses used to stand, there are now only pieces of metal roofing poking through the muck. Rigaberto Ramirez(ph), who was at work at the time guarding the hospital, recalls what it was like just before the mud came down.

REDDEKOP: He says, `There was a horrible noise, like a lot of semi trailers coming down from the volcano. And then sirens went off in the police station. But,' he says, `people couldn't escape because it was the middle of the night, and there wasn't electricity.'

Mario Mendoza(ph), a volunteer firefighter, tried to help that night. He managed to save a two-month-old baby and lead her mother to dry ground.

REDDEKOP: He says he found her and her mother in the middle of the mud. He took her with a sheet tied around his back. He climbed onto a roof. Someone threw him a rope tied to a tree, and he pulled himself across the current.

But hundreds of people remain missing. Fewer than a hundred bodies have been recovered.

REDDEKOP: Cecilia Varone talks in the Mayan language of Tzutujil, telling how 14 of her nieces and nephews were killed or disappeared. Only two of their bodies have been found.

For the Mayan people, being able to bury their dead is an important part of their culture, but the search for more bodies has stopped. The government is talking about naming the area a mass grave.

REDDEKOP: Varone says, `It's sad, the thought of having to convert the land into a cemetery.'

And the saddest thing, she says, is to not know where the rest of her family members are.

REDDEKOP: Not far away, two men use garden hoes to try and clear a road. This is near the Hospitalito, a small hospital that only opened in April. It's also filled with mud and is unusable. American Gil Mobley is the medical director of the hospital foundation. He says they'll just have to build again, probably in a new location.

Mr. GIL MOBLEY (Hospital Foundation Medical Director): There's a 12,000-foot volcano behind us. There are no manmade forces on Earth that is going to keep this from happening again. It's inconceivable that we can dig out from eight feet of mud littered with bodies throughout.

REDDEKOP: But that'll mean a long wait for people here to have a hospital again. Mortality in childbirth in the area is high. The closest hospital is now an hour and a half away and too expensive for many to get to.

Now people are treated in a small health clinic in nearby Santiago Atitlan. There's no running water today; medical supplies are limited. Nurse Kathy Roche(ph) fears that poor sanitation will cause diseases that could kill more people, especially children and seniors.

Ms. KATHY ROCHE (Nurse): Many people will be really very, very ill. Hepatitis A usually is not fatal, but it's debilitating and people are sick for a long time with it. And cholera can be because of dehydration from the diarrhea from cholera. Especially among the young and the old, dehydration could be a major problem. You know, with dehydration comes death.

REDDEKOP: But Roche says efforts are under way to get clean water to homes and shelters.

REDDEKOP: More than 120,000 Guatemalans remain in schools, churches and other buildings, and it could be months before they have a place to call home again. But people here have hope.

REDDEKOP: And in one church shelter, 22-year-old Natalia Rianda sits behind her sleeping newborn baby on a mattress on the floor. She tells how she was rescued from the mud and flooding already in labor. Shortly after, she gave birth. She named the baby Moses because he was found out of the water, and the baby is now a symbol for some people here that they can survive. For NPR News, I'm Lorenda Reddekop in Santiago Atitlan, Guatemala.