Accessibility links
Why Okra Has a Reputation as a Bad Seed Commentator Siddhartha Mitter reflects on why many Americans consider okra to be a vegetable of ill repute. He believes the vegetable's African origin may have something to do with it. Mitter is an independent writer on politics and culture from Boston.

Listen
Why Okra Has a Reputation as a Bad Seed

Commentator Siddhartha Mitter reflects on why many Americans consider okra to be a vegetable of ill repute. He believes the vegetable's African origin may have something to do with it. Mitter is an independent writer on politics and culture from Boston. 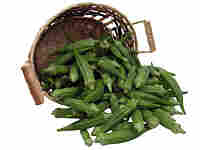 When you think of the South, you also might think of Southern cooking. Walk into a Southern kitchen at dinnertime, and there's a good chance okra will be on the menu. While many Americans dislike okra, commentator Siddhartha Mitter is a fan.

I discovered my favorite vegetable at age seven at my grandma's table in Calcutta, India. That vegetable was okra. Simmered in mustard oil, the green pods were rich, pillowy and moist. I became hooked for life. In America, okra is quite the vegetable of ill repute. It's commonly grown in Southern gardens, but also roundly disliked. Okra has lovers and haters, but mainly haters. The reason is the texture. Here we call that lush consistency `slime,' and cookbooks always offer tips to help defeat the ooze.

But defeating the ooze defeats the point. In Africa, Brazil and the Arab world, okra's consistency serves to bind the stew; often, the thicker the better. A sauce gumbo from Ivory Coast involves okra sliced to the vanishing point, a green substance that stretches taut off the spoon, infused with palm oil, freckled with seeds, crackling cubes of beef and sinews of smoked fish and giant quarters of crab. I call that delicious, but many Americans would call it disgusting.

Our issues with okra run deep, ever since it came out of Africa. A British writer in colonial India said, `The pods, on account of their slimy nature, are not generally in favor with Europeans.' A writer in the American colonies said okra stew was `reckoned a dainty by some people and especially by the Negroes.' In 1949, one expert pronounced it `too gooey or mucilaginous' to suit American tastes. Okra was on the wrong side of history. The rejection of such items of Negro food as okra or chitlins could only drive those foods underground. Like the so-called funk of black music, the slime of okra was a little bit defiant and a little bit shameful. But unlike the music, okra did not cross over.

No surprise that okra's adoption by white America was limited to poor, rural folks. And poor families, black and white, often shed okra as they rose in status or moved to the city. But okra is coming back. The strongest force behind okra's revival is immigration. Like it or not, that African sauce gumbo has come to America. So have mokaika(ph) from Bahilla, callaloo from Haiti, bomyea stew from Egypt and more. These proud, delicious concoctions are helping our own okra stews, gumbos and limpet susans(ph) come out into the sunlight and discover the rambunctious global family from which they were estranged.

CHIDEYA: Siddhartha Mitter is a Boston-based independent writer on politics and culture.