Accessibility links
The Virtues of the Quiet Hero As a Naval aviator, congressman and parent, John McCain has been guided by a belief in honor, faith and service. They are values he tries to model for his children and future generations of Americans.

Listen
The Virtues of the Quiet Hero

I believe in honor, faith and service -- to one's country and to mankind. It's a lesson I learned from my family, from the men with whom I served in Vietnam and from my fellow Americans. 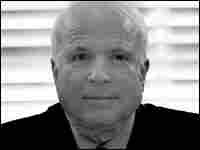 John McCain is the son and grandson of Navy admirals. After graduating from Annapolis as a naval aviator, McCain was shot down over North Vietnam and spent five years as a prisoner of war. He has been a U.S. Senator from Arizona since 1986 and ran for President in 2000.

Take William B. Ravnel. He was in Patton's tank corps that went across Europe. I knew him, though, as an English teacher and football coach in my school. He could make Shakespeare come alive and he had incredible leadership talents that made me idolize him. What he taught me more than anything else was to strictly adhere to our school's honor code. If we stuck to those standards of integrity and honor then we could be proud of ourselves. We could serve causes greater than our own self-interest.

Years later, I saw an example of honor in the most surprising of places. As a scared American prisoner of war in Vietnam, I was tied in torture ropes by my tormentors and left alone in an empty room to suffer through the night. Later in the evening, a guard I had never spoken to entered the room and silently loosened the ropes to relieve my suffering. Just before morning, that same guard came back and re-tightened the ropes before his less humanitarian comrades returned. He never said a word to me. Some months later on a Christmas morning, as I stood alone in the prison courtyard, that same guard walked up to me and stood next to me for a few moments. Then with his sandal, the guard drew a cross in the dirt. We stood wordlessly there for a minute or two, venerating the cross, until the guard rubbed it out and walked away.

My determination to act with honor and integrity impels me to work in service to my country. I have believed that the means to real happiness and the true worth of a person is measured by how faithfully we serve a cause greater than our self-interest. In America, we celebrate the virtues of the quiet hero -- the modest man who does his duty without complaint or expectation of praise; the man who listens closely for the call of his country, and when she calls, he answers without reservation, not for fame or reward, but for love.

I have been an imperfect servant of my country and my mistakes rightly humble me. I have tried to live by these principles of honor, faith and service because I want my children to live by them as well. I hope to be a good example to them so that when their generation takes our place, they will make better decisions and continue to pave the path towards righteousness and freedom.