Accessibility links
Sunnis Divided Ahead of Iraq's Constitution Vote Last-minute compromises have divided the Sunni Arab community in Iraq, which previously had been largely unified in its opposition of the country's draft constitution. This split has boosted chances the document will pass in Saturday's national referendum -- though other challenges remain.

Last-minute compromises have divided the Sunni Arab community in Iraq, which previously had been largely unified in its opposition of the country's draft constitution. This split has boosted chances the document will pass in Saturday's national referendum — though other challenges remain. 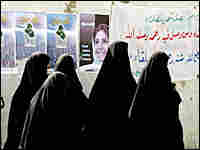 In Iraq, the Sunni community is divided ahead of tomorrow's vote on a draft constitution. Sunni insurgents bombed the offices of the Iraqi Islamic Party again today. That Sunni party has been attacked three times since it decided to drop its opposition to the constitution. The Sunni split has boosted the chances the document will pass. But as NPR's Anne Garrels reports, the battle is far from over.

At the Kudari Mosque(ph) in Baghdad, the Sunni imam weighed the pros and cons of the constitution. While acknowledging it still falls short of Sunni demands, he said, `There will now be another chance to review the document after December's national election.'

GARRELS: `To vote no,' he told the assembled, `would mean going back to square one, another interim government with limited powers and the possibility of civil war.' Calling it a difficult decision, the imam made it clear he had now decided to vote yes, despite threats. His analysis persuaded biochemist Hisham Kamal to reconsider his decision.

Mr. HISHAM KAMAL (Biochemist): (Through Translator) I shall leave it until tomorrow, but most probably I will now vote yes.

GARRELS: But not everyone was swayed.

GARRELS: Ramsami Mohammed, an engineer, worries the Sunni minority will not have enough votes in a new parliament to get the changes they still want.

GARRELS: Radio and TV have been the key ways Iraqis have learned about the last-minute changes. And judging by a call-in program on People Radio, Iraqis will vote in favor of the constitution. Maji Jihad(ph), a former general and the sheik of the predominantly Sunni Akashali clan(ph), sits in a living room plunged into darkness by yet another electricity cut. He's encouraged the constitution can now be changed, but he's still concerned and is urging his clan to vote no.

Sheikh MAJI JIHAD (Sunni Akashali Clan): (Through Translator) It is an invitation for the division of Iraq, which is something we oppose.

GARRELS: But that he will vote at all is a dramatic change. He opposed the US occupation of Iraq and initially supported the resistance. But when attacks started targeting civilians, he changed his mind.

Sheik JIHAD: (Through Translator) Me and my whole tribe are opposed to this kind of insurgency. The true identity of the resistance has become obscure to us.

GARRELS: However, thrown out of the army and unemployed, he still feels locked out. And he believes his sons, who graduated as engineers, have also been denied work simply because they're Sunnis.

Sheik JIHAD: (Through Translator) We are back to the days of Saddam, when only Baathists were allowed to have jobs.

GARRELS: He admits he's afraid his sons could be recruited by the insurgents.

Sheik JIHAD: (Through Translator) Of course that worries me a lot.

GARRELS: Maji Jihad says it's important Sunnis take part in the December elections to ensure they have as many representatives in the next parliament as possible. What concerns him is that Sunnis are split, with no unified leadership. He may throw his support to someone like former Prime Minister Ayad Allawi, a secular Shiite who's appealing to disaffected Sunnis to join him.

An important indicator of the change in views will be, first, how many Sunni Arabs vote tomorrow, then how they vote, especially in the insurgent strongholds of Anbar province, where most sat out the last election. For Carina Perelli, the UN adviser to the Iraqi Election Commission, Anbar is her most important project.

GARRELS: Because of local intimidation, poll workers from the outside are being sent to Anbar to help out. While they will be paid $500, Perelli says the huge numbers of people who applied and the dangers they face suggests something more than money is at stake.

Ms. PERELLI: They all know that it's a high-risk situation--it--all the party agents. I mean, the fact that people want to participate in those numbers and to be basically sitting ducks in a polling station for a whole day in very tough regions, some of them, I think that it says a lot about what the Iraqis want for Iraq.

GARRELS: Because of security measures, traffic has all but disappeared. And in the unusual quiet of a sidewalk cafe, a group of men, Shiites and Sunnis, play Dominos. For the sake of peace, they say they will vote yes. They hope it will be just as quiet tomorrow. Anne Garrels, NPR News, Baghdad.