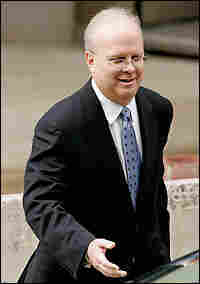 White House political adviser Karl Rove leaves the U.S. Federal Courthouse in Washington, D.C., after testifying for the fourth time before a federal grand jury investigating the CIA leak case, Oct. 14. He declined to comment on the proceedings. hide caption

The president's top adviser made his fourth and final appearance today before a grand jury that is investigating the Valerie Plame affair. Karl Rove testified for more than four hours, and then he left without speaking to the crowd of reporters that had gathered outside. Rove's attorney released a statement saying the special prosecutor had said he had made no decision concerning charges in the case. NPR White House correspondent Don Gonyea joins us now to talk about this day and the long-running drama of Valerie Plame and the White House.

SIEGEL: Four and a half hours of testimony. Does the length of that appearance tell us anything about whether Karl Rove is going to be indicted?

GONYEA: It does not answer that main question, which is really the one everyone's asking. Also, we do have to be careful about speculating on what went on inside a closed-door proceeding from which everyone except the participants, of course, was excluded. But a lot of people had wondered whether Rove's fourth appearance here would be just a short one, one to straighten out a few things, maybe clear up just a couple of points. Obviously, there was more to this testimony than that.

But let's read here the statement that came from Rove's attorney, Robert Luskin, after the testimony. Here are the key two lines. He says, `The special counsel has not advised Mr. Rove that he is the target of the investigation and affirmed that he has made no decision concerning charges. The special counsel has indicated that he does not anticipate the need for Mr. Rove's further cooperation.'

SIEGEL: So he's not coming back; there's not going to be a fifth appearance before the grand jury. Why, then, did he come back for this round of questioning? He'd been there so many times before.

GONYEA: Right. Rove volunteered to return back in July after Time magazine reporter Matt Cooper had testified to a conversation with Rove in July of 2003. That seems to have contradicted at least some versions of the story Rove had been telling over the past couple of years. It's possible that Cooper's testimony may have contradicted what Rove had told the FBI and what he had previously also told the grand jury.

SIEGEL: Well, if it does, then what could the special prosecutor make of it?

GONYEA: That's one of the big critical questions. We're only guessing what Patrick Fitzgerald will make of anything here. He could--could--view Rove's failure to report this conversation with the journalist as an effort to mislead or to obstruct. That could--again, could--lead to charges quite apart from the original allegations that started the investigation in the first place.

SIEGEL: Of course, when you say `could,' the other side is it could not also. We don't really know at this point.

SIEGEL: But this is a good place to have you explain again where this entire controversy began.

GONYEA: Right. It all goes back to the president's State of the Union address before the invasion of Iraq, or even further, really, to when former Ambassador Joseph Wilson was sent by the CIA to Africa to see whether the Iraqis had tried to buy uranium from the country of Niger. Wilson came back, said he found no evidence of such an effort. But the president made reference to the claim anyway in the 2003 State of the Union address months later in justifying the pending invasion.

SIEGEL: And Joseph Wilson, Ambassador Wilson, had not gone public with his conclusion about Niger before that?

GONYEA: No, but he did after the war began and no weapons of mass destruction were found, and after the president kept talking about the same justifications. In July of 2003, he wrote a piece for The New York Times, and after that, journalists started hearing from administration sources that there was something wrong with Wilson, that his wife worked at the CIA and that may have had something to do with his going to Africa in the first place. And those leaks are what looks like the outing of a covert agent, violating a 1982 law.

SIEGEL: And then enter Patrick Fitzgerald.

GONYEA: Right, and that was two years ago. And by now, all indications are that he's ready to wrap things up, and we wait to see what he is going to come up with, if anything, in terms of charges and indictments.

GONYEA: Could be next week. The grand jury is in place till the 28th of this month.