Accessibility links
Iraqis Peacefully Vote on Constitution Polls close in Iraq after millions of people cast their ballots in a vote on whether to approve their new constitution. For the most part, the day was quiet, with only scattered reports of minor attacks. Results on the referendum won't be released until Monday.

Polls close in Iraq after millions of people cast their ballots in a vote on whether to approve their new constitution. For the most part, the day was quiet, with only scattered reports of minor attacks. Results on the referendum won't be released until Monday. 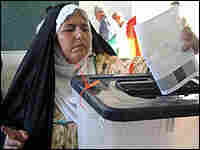 An Iraqi woman casts her vote in the constitutional referendum at a polling station in the northern Iraq city of Kirkuk, Oct. 15 Reuters hide caption

A milestone in Iraq today. Voters there are going to the polls to give a yes or no to a new constitution. Now if the constitution passes, there'll be national elections in December for that nation's first full-term government since the toppling of Saddam Hussein. The final draft was only approved this week after months of tough negotiations, but there are still deep divisions among Iraqis over the document. NPR's Anne Garrels joins us from Baghdad.

Anne, thanks for being with us.

SIMON: And how does the voting seem to be going?

GARRELS: Well, it picked up dramatically over the day as Iraqis gauge the security situation in their particular areas. In Baghdad, the lights were back on after a major blackout caused by sabotage. There were a few attacks on polling stations here in the capital. Four police were wounded in one incident, and in another, police returned fire wounding three civilians walking to vote. The Iraqi security forces are pretty jumpy. But it's been remarkably quiet overall.

The big exception is Ramadi, the capital of Anbar province, and other towns to the west where the insurgency is still strongest. Because of threats and local intimidation, poll workers were sent to Ramadi from outside to make sure people could vote, but there have been clashes between troops and insurgents and little sign of any voters on the streets. That is not good news for the US, which had tried to promote the vote in Anbar.

However, in other predominantly Sunni Arab areas where people had sat out last January's elections, voters are turning out in large numbers by all accounts, a sign they want to have their voices heard this time. And there was an emotional scene at a polling station in my neighborhood in Baghdad. By midday, almost all of the registered voters had turned up and the head of the local election commission literally wept in relief that people had voted in such large numbers and that no one had been hurt.

SIMON: Now there were last-minute changes to the document that people are voting on today to try and assuage the concerns of Sunni Arabs. Does that seem to be having some effect?

GARRELS: Yes. Some clearly are now voting yes, not enthusiastically, not because they like the constitution, but because they hope they can change it after December's elections, and because they want a permanent government with full powers to solve problems instead of yet another interim government. But it looks like many are voting no. The unsolved issue is federalism. The Shiite majority, and especially the Kurds, want the right to have autonomous regions in the south and north where they're concentrated. The Sunnis still fear that this is gonna leave them impoverished in the oil-poor center. And they also fear this is gonna lead to the break-up of the country. And even though they now will have the chance to review the constitution after the December elections, they have no real confidence that they're going to have the numbers to make the changes they want.

SIMON: What kind of majority is necessary to approve the constitution and does that help define its likelihood of passing?

GARRELS: Well, you only need a simple majority to pass. And that looks likely now. To defeat it, the Sunni Arabs would have to get two-thirds in three provinces voting no. Because of the split in the Sunni vote now, that is highly unlikely. But, you know, this is just the beginning of sorting out what kind of a country Iraq will be. Changes will be discussed to the constitution and laws must be passed to define and regulate many of the clauses. So this is just the beginning.

SIMON: NPR's Anne Garrels in Baghdad, where today Iraqis are turning out to the polls, apparently in large numbers, to vote up or down on the proposed constitution. Anne, thanks very much for being with us.