A talk with George Clooney about the new movie he's co-written and directed, Goodnight, and Good Luck. The movie covers the conflict between newsman Edward R. Murrow and Sen. Joseph McCarthy. 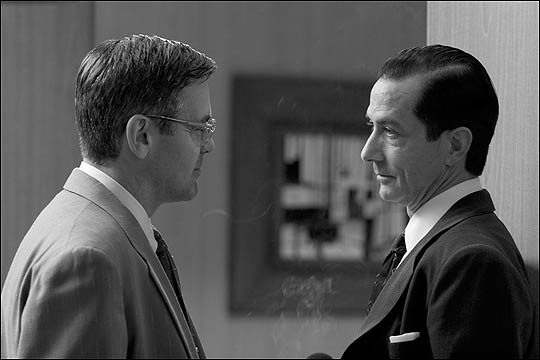 George Clooney has made a movie in black and white about a man who laid it out that way for American television viewers.

Mr. DAVID STRATHERN: (As Edward R. Murrow) This is no time for men who oppose Senator McCarthy's methods to keep silent or for those who approve. We can deny our heritage and our history, but we cannot escape responsibility for the results.

SIMON: David Strathairn is Edward R. Murrow, the man who's been described as the patron saint of US broadcasting, the man who touched the nerves and conscience of an isolationist America with his descriptions of the Blitz in London, the concentration camps of Europe, and then went on to challenge Senator Joseph McCarthy and America's courage during a period of fear. George Clooney has directed this film, "Goodnight, and Good Luck," from a script he wrote with Grant Heslov. He also plays CBS producer Fred Friendly. George Clooney joins us now from our studios in Carnegie Hall in New York.

Mr. GEORGE CLOONEY (Director, "Goodnight, and Good Luck"): Well, it's my pleasure to be here.

SIMON: And we're also joined in Washington, DC, by the last reporter who was ever hired by Ed Murrow, our own senior news analyst Dan Schorr.

Dan, thank you for being with us.

DAN SCHORR (NPR Senior News Analyst): Oh, I'm delighted. I would not have missed this.

Mr. CLOONEY: Well, Dan is too handsome for the role.

SCHORR: Oh, oh, flattery will get you anywhere.

SIMON: You grew up the son of an anchorman in Cincinnati, Nick Clooney, and I gather Ed Murrow was a kind of personal hero in your household.

Mr. CLOONEY: Yeah. There was--broadcast journalism was a big part of my life. You know, my father had several different jobs, but it was mostly at a place called WKRC in Cincinnati, Ohio. And I grew up sitting on the floor watching my father, who was also a news director, with reporters coming in pitching their news stories. And I thought that that was--to me that was always a really exciting thing to watch how a day's news was put together.

SCHORR: I'll tell you one thing that has really struck me. You are 44 years old.

SCHORR: And therefore, in 1954, which is a period which plays a big part in this film, you were nowhere near around. Having lived through that period myself, I am struck by the skill with--you recreated that whole era. How do you do that? Obviously, you can get experts who can get you to recreate what a newsroom looked like, what other things looked like. I'm talking about the climate in America in 1954 when the whole country was a little bit scared, and people were beginning to look for reds under every bed. And you get a touch of that.

Mr. CLOONEY: I think that it wasn't all that alien to try and recreate certain fears--people turning on one another, civil liberties being pushed or sort of pushed out of the way. As you know, because you are not just a journalist but one of the best ever, I feel as if my job is--as an entertainer--to raise the debate, not to try and answer the question, and so my thought was it was a good time to have those questions again. Not answers, because I don't know the answers. I just thought it was a good thing to ask the question.

SIMON: Let me, if we could--let's run a clip now, a scene between Robert Downey Jr., who plays reporter/producer Joe Wershba, who worked for Ed Murrow, and his wife--although they were married secretly; couldn't do that at CBS in those days--Shirley Wershba, played by...

Mr. CLOONEY: Mr. Schorr, you know them, don't you?

Mr. DOWNEY: (As J. Wershba) Yeah, and Fred witnessed it.

Ms. CLARKSON: (As S. Wershba) Well, maybe you should talk to Murrow.

Mr. DOWNEY: (As J. Wershba) Maybe I should sign it.

Ms. CLARKSON: (As S. Wershba) If you don't sign this, are you and I a target?

SCHORR: I could almost forget that I was looking at a recreation docudrama because they did this marvelous marriage of stock film of McCarthy and then used actors to recreate Murrow and those who worked with him. And it was instantly done.

Mr. CLOONEY: I think McCarthy was...

Mr. CLOONEY: McCarthy was very good as himself, didn't you think?

SIMON: Mr. Clooney, I've got a real actor's question for you about Joe McCarthy.

SIMON: Going over the biographical information, you are now within a few months of being exactly the same age that Joe McCarthy was at the time he's depicted in the film.

Mr. CLOONEY: But our livers are different ages.

SIMON: From everything I've read, your livers are certainly of different ages. But I wonder if some smart producer/director wanted to make a film in which Joe McCarthy was not just shown in newsreel but depicted an actual character and then said, `Well, you know, George Clooney's about the right age. This would be interesting.' How would you play Joe McCarthy and make him a recognizable human being, not just a newsreel character?

Mr. CLOONEY: Well, the hard part is--and the reason we didn't have an actor playing McCarthy is because if you had an actor actually do an exact impersonation of Joe McCarthy, every critic in the country would say that we're making him too much of a buffoon and too arch. You wouldn't really believe that someone could reach that kind of power acting the way he did.

Senator JOE McCARTHY: I'm compelled by the facts to say to you that Mr. Edward R. Murrow as far back as 20 years ago was engaged in propaganda for Communist causes. Now Mr. Murrow, by his own admission, was a member of the IWW--that's the Industrial Workers of the World--a terrorist organization cited as subversive by an attorney general of the United States.

SCHORR: How are you at ranting?

Mr. CLOONEY: After a few years, I've gotten much better at ranting.

SIMON: Dan, you knew Murrow at least a little bit, didn't you?

SIMON: Could you tell us a little bit about what he was like in person?

SCHORR: Murrow was a marvelous to his colleagues especially. At a time when I really felt honored just to have been brought on board at CBS, he would do interviews with some of the correspondents as they returned from their assignments every now and then. When he would sit down with me in the studio, this god of television made me feel as though I was important and he was not, 'cause I was a reporter, getting out there to report the news, whereas he only sat in the studio. It was wonderful to sit there with him and have him say, `Let me finish this thing I'm doing here, then we can go down and have several drinks.' He just--he made himself from an icon into a pal.

Mr. CLOONEY: ...and Milo Radulovich and Don Hewitt, and they all referred to him as Mr. Murrow.

Mr. CLOONEY: Did you call him Ed?

SCHORR: I call him Ed when talking to colleagues and friends. I don't think I've ever addressed him as Ed.

Mr. CLOONEY: It's a funny thing, but I think that's true of him. I think that's--I've yet to find anyone who dealt directly with him that called him Ed. I think they were all--I think he deserved that respect.

SIMON: I want to thank both of you very much for being with us. Mr. Clooney, thanks very much.

Mr. CLOONEY: Well, hey, it's my honor to really--I'm happy to get to talk to both of you.

SCHORR: It's very much my pleasure.

You're listening to WEEKEND EDITION from NPR News.