Accessibility links
Vivian Malone Jones Dies at 63 The civil rights pioneer, who had been barred from attending college by Gov. Wallace, was the first African-American graduate of the University of Alabama. 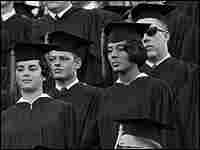 Vivian Malone Jones at her graduation from the University of Alabama in 1965. Bettmann/Corbis hide caption

When Vivian Malone Jones tried to enroll at the University of Alabama in 1963, George Wallace stood in the way. In his infamous "stand in the schoolhouse door," the then-governor of Alabama sought to block blacks from entering the school, despite orders to admit them.

Eventually Wallace stepped aside and Jones and fellow student James Hood enrolled, but only after an agreement was reached between the White House and Wallace's aides.

Jones died Thursday after suffering a stroke. She was 63. The civil rights pioneer had become the first black to graduate from the University of Albama and had had a long career serving the government that helped her attain a university education. Wallace's son, George Jr., called Jones "a true American hero" and said he "was deeply saddened" to hear of her death.