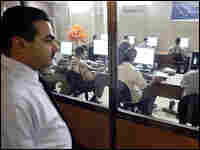 Secretary of State Condoleezza Rice says Iraqi officials informed her the country's draft constitution probably passed. Officials are counting millions of ballots cast in Saturday's constitutional referendum. There was a high Sunni turnout, with most reportedly voting no to the draft charter.

Estimates put voter turnout at more than 60 percent. There was relatively little violence at polling centers on election day, but the U.S. military has reported that five American soldiers were killed in a roadside bombing in Ramadi Saturday.