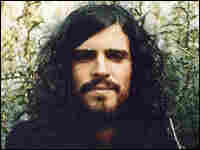 Devendra Banhart was named by guru Maharaji Prem Rawat. In an Indian myth, Devendra is identified as "king of gods." cripplecrow.com hide caption

Banhart's music blends West Coast grooves with a lo-fi sound that gives his lyrics sincerity and authority. The results lie somewhere on the arc from Bob Dylan to Beck. Songs like "I Feel Just Like a Child," while steeped in a sense of innocence, focus on questions any adult would find difficult to answer.