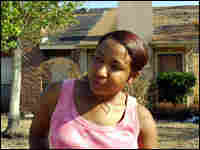 Kelli Wilkerson stands in front of her home on Honeysuckle Lane during a brief visit in late September. Cheryl Gerber hide caption 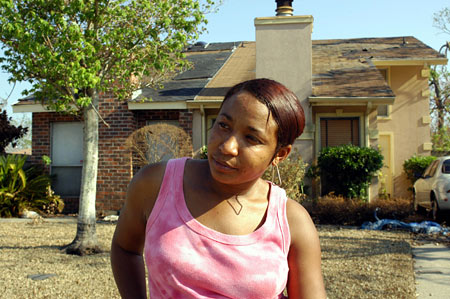 Kelli Wilkerson stands in front of her home on Honeysuckle Lane during a brief visit in late September.

Last month, Robert Siegel visited New Orleans East to see how residents of one block, Honeysuckle Lane, were coping in the wake of Hurricane Katrina, which forced them to evacuate. Siegel talks to some of the residents of the cul-de-sac, who were displaced by the storm.

So far, they share one sentiment: a deep longing for the place they've left behind.

After staying with family elsewhere, Pat Zeller and her husband are back in New Orleans. They're guests at a downtown hotel courtesy of FEMA. "My heart is in New Orleans. I can't image living anyplace else. This is my home…," she says.

Keia Wyre had resided on Honeysuckle Lane with her mother and sister. Now she's living in Hampton, Va. "It's really like a major culture shock to me because I'm so used to being in my city where everything is… happening," Wyre says. "An event is always going on. I'm what they call a New Orleans diehard. I love my city. I want to go home. I want to help rebuild the city. I want to rebuild my own home."

Her neighbor, Kelli Wilkerson, agrees. "This is all I know. I have never been anywhere else other than to visit. This is my home, this is my town, this is where everything I ever had, owned, experienced, it's all right here."

But Wilkerson wonders if New Orleans will ever be the same -- especially as long as its residents are scattered around the country. "We need to rebuild," she says. "We need to be rebuilding right now." One way to do that, she says, is to provide free housing in New Orleans hotels for residents so that they can begin to rebuild the city.

On Monday, Wilkerson learned she no longer needs to depend on the kindness of friends for shelter. FEMA has moved her into a hotel at the edge of the French Quarter.