Accessibility links
Delays Plague Distribution of Trailers to Rita Homeless Trailers are still sitting in Gulf Coast dealerships even as thousands of people are still in need of housing, seven weeks after Hurricane Rita hit. FEMA says it is getting trailers to hurricane victims as quickly as possible, but the problem is finding places to put them.

Trailers are still sitting in Gulf Coast dealerships even as thousands of people are still in need of housing, seven weeks after Hurricane Rita hit. FEMA says it is getting trailers to hurricane victims as quickly as possible, but the problem is finding places to put them. 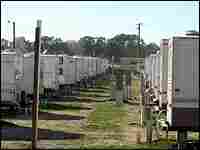 FEMA contractors have dubbed this trailer park near Baton Rouge "Renaissance Village." So far, FEMA has installed only about 2,400 trailers in Louisiana, a state that lost more than 200,000 homes in the hurricanes. Scott Horsley, NPR hide caption 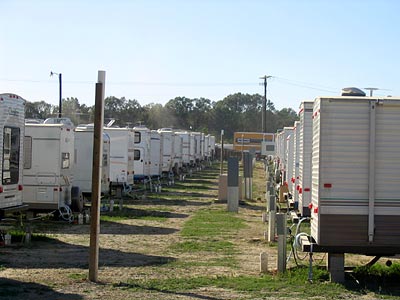 FEMA contractors have dubbed this trailer park near Baton Rouge "Renaissance Village." So far, FEMA has installed only about 2,400 trailers in Louisiana, a state that lost more than 200,000 homes in the hurricanes.

Down in the area Katrina hit, more than 100,000 travel trailers have been ordered to shelter displaced residents of the region, but those trailers seem to be moving in slow motion. Only a small fraction are ready to be occupied more than seven weeks after the storm struck. As NPR's Scott Horsley reports, those who need housing are beginning to ask, `What's the delay?'

John Jackson is settling into his new trailer in the town of Baker, Louisiana, just north of Baton Rouge. After Katrina drove him from his home in New Orleans, Jackson spent several weeks in a church shelter. He says the trailer is a big improvement.

Mr. JOHN JACKSON: Oh, man, a whole lot--whole lot private. You got your own private--take a bath without anybody watching you, you know. It's pretty good, pretty good.

HORSLEY: Jackson steps inside the Pioneer-Fleetwood trailer and flips on the air conditioning. He says the air around his old New Orleans house still carries the stench left by post-hurricane floods. Until that's cleaned up, which he figures will take until December, this trailer is home.

HORSLEY: Contractors for the Federal Emergency Management Agency boast about the speed with which they assembled this trailer park, which they call Renaissance Village. Gravel roads were carved into a vacant field, and power lines were strung for some 600 trailers. The problem is Louisiana needs more than 100 times that many trailers to house the families displaced by the hurricanes, and at the rate FEMA's been going so far, that would take more than three years.

Senator DAVID VITTER (Democrat, Louisiana): This sort of trickle in is completely unacceptable. It's never going to meet the need on any reasonable time frame.

HORSLEY: Louisiana Senator David Vitter says he's complained repeatedly to FEMA about the slow pace of providing trailers. More than twice as many have gone into neighboring Mississippi, but there, too, many more are needed. At a town hall meeting in Baton Rouge this week, Economic Development Secretary Mike Olivier said Louisiana's economy will not recover unless it gets more housing.

Secretary MIKE OLIVIER (Economic Development Department, Louisiana): The key to the rebuild for Louisiana and the entire Gulf Coast is: How fast can we find a decent place for people to live, so that these people can go back to work?

HORSLEY: Business consultant Jessica Rareshide is baffled by the delay. Driving around the state, she's seen plenty of trailers on dealers' lots just waiting to be sold.

HORSLEY: Local RV dealers would also like FEMA to buy more from them, and they complain that only one in-state dealer has gotten any of the government's business. But FEMA's Mike Hirsch says the problem isn't finding trailers. It's finding places to put them.

Mr. MIKE HIRSCH (Federal Emergency Management Agency): We want to make sure, before people move into mobile homes and travel trailers, that there are no toxic materials in the area. We want to make sure they're not in the floodplain because, unfortunately, we've had experiences over the years where we placed mobile homes inappropriately and people died as a result of subsequent storms.

HORSLEY: FEMA does say it's picking up the pace. The agency is in final negotiations on dozens of additional sites in Louisiana. Those sites should provide space for another 6,000 trailers in the next two weeks or so. That still leaves a big housing shortage, though, in a state where more than 200,000 homes were destroyed by the hurricanes. Jessica Rareshide volunteered to help FEMA as it tries to move more quickly.

HORSLEY: After a period of indecision, FEMA has agreed to continue putting trailers on land owned by companies that need employee housing. Only workers who lost homes are eligible, though, so that doesn't help companies hiring new workers from outside the area.

Meanwhile, some people living in the Baker trailer park have begun to decorate with houseplants, and the park now has a Laundromat. The Reverend Charles Turner, who spent weeks in a shelter before getting his trailer, says he's just grateful for what FEMA has done.

Reverend CHARLES TURNER: They doing the best they can do. I would advise people just to have patience, you know.

HORSLEY: For tens of thousands of others, though, who are still waiting for their trailers, patience is wearing thin. Scott Horsley, NPR News, New Orleans.