Accessibility links
Death Toll from South Asia Quake Reaches 79,000 A new tally from regional officials in Pakistan puts the death toll from the Kashmir earthquake and its aftermath at 79,000. Dr. Richard Brennan, director of global health programs for the International Rescue Committee, provides an update on efforts to get aid to quake survivors.

A new tally from regional officials in Pakistan puts the death toll from the Kashmir earthquake and its aftermath at 79,000. Dr. Richard Brennan, director of global health programs for the International Rescue Committee, provides an update on efforts to get aid to quake survivors. 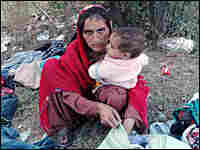 The death toll from this month's earthquake in South Asia has risen sharply. Pakistan's government puts the number at more than 47,000, but tallies from regional authorities indicate that nearly 80,000 people died, most of them in Pakistan; others in India. And aftershocks continue to roll through the region. According to a UN estimate, several million people have been left homeless, many in remote mountain villages. Richard Brennan is director of health programs with the International Rescue Committee, a relief group working in Pakistan. He says his team spent the day working in villages in the northern part of the hard-hit Mansehra district.

Mr. RICHARD BRENNAN (Director of Health Programs, International Rescue Committee): We spent much of our time in a village called Markan, where we ran a medical clinic, and the village itself has been devastated by the earthquake. Two thousand people live in the village; 33 people were killed. All the houses now are non-habitable, and everyone's camping out in tents and other structures that--made from makeshift materials.

BLOCK: It sounds like some supplies then have gotten in there if there are tents at this village now.

Dr. BRENNAN: Yeah. Only about 50 percent of the families there have actually received a tent, so the others have made their dwellings from blankets and plastic sheeting and whatever they can find. But it was comforting to see two or three trucks come through today distributing blankets, distributing food to that village and other villages around.

BLOCK: Can you describe the landscape some and how difficult it is to get supplies in there?

Dr. BRENNAN: Well, it's quite mountainous and it's physically very, very beautiful. It's a wonderful part of Pakistan. The roads have been cleared somewhat; they're still narrow. There have been landslides blocking roads. And there are other villages that are still only accessible by foot.

BLOCK: You mentioned a medical clinic that your staff was working at in this village of Markan. What sorts of either injuries or diseases are you seeing now?

Dr. BRENNAN: The main diseases we're seeing right now--we're not seeing the acute injuries. Most of the people that have had--that sustained injuries during the earthquake had the immediate medical care that they required; they've had their stitches and so on. We're seeing a number of those individuals with infected wounds. But you know, as time moves along, the emphasis of medical care is really going to shift to these infectious diseases like pneumonia, diarrhea. There's a big concern about measles because in a stressed population, measles can spread very, very quickly and the vaccination rate here is very low.

But certainly, the commonest problem we're seeing right now is chest infections and colds because of the exposure, because of the lack of shelter. It's getting quite cold now, we've had a lot of rain, so exposure is a problem.

BLOCK: And the idea is, even with these cold temperatures to provide shelter in place--in other words, not to try to bring people down to where there might be more permanent shelter in other places?

Dr. BRENNAN: Well, it's a great question, and it's a point of a lot of discussion here. A number of the UN agencies and certainly the government were eager to set up camp settlements, but the Pakistanis themselves are--most of them are adamant they want to stay near their homes. So there's still ongoing discussions right now about how many camps there will be. Certainly, it would be easier for us to provide services if people came down to more camp-type settlements, but our experience in other refugee settings and other disaster settings suggests that's really not the best way to go about providing shelter. It really is better to let people stay where they want to stay, where they feel more comfortable. They can rebuild. And, you know, over time they'll certainly be able to access the full services that they require.

BLOCK: They're talking about bringing winterized tents to these people. I'm trying to figure out what that means and if these tents would be able to survive a winter in these mountains.

Dr. BRENNAN: Perhaps the biggest concern is the fact that these tents are actually very much in short supply. One of the senior UN officials said only a couple of days ago that he believes that there just aren't enough of these tents existing anywhere in the world to meet the needs that we have right now in the earthquake-affected area. And part of the irony of it is that Pakistan is one of the cheap producers of these types of tents. So it's going to require a concerted relief effort for months and months to come.

BLOCK: Dr. Brennan, thanks for talking with us.

Dr. BRENNAN: Thanks a lot, Melissa.

BLOCK: Richard Brennan is director of health programs for the International Rescue Committee. He spoke with us from Abbottabad, Pakistan.