Accessibility links
The Spread of Bird Flu European Union officials this week declared the spread of bird flu from Asia to Europe a "global threat" and are urging international cooperation to contain the virus. The H5N1 virus, which for now can only be transmitted from birds to humans, has killed 60 people. A timeline of the virus' spread since 2003.

The Spread of Bird Flu

The Spread of Bird Flu 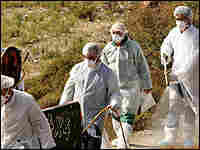 Greek health officials spray disinfectant in an area outside a small farm, where a bird flu-infected turkey was found on Oct. 17, 2005. Reuters hide caption

European Union officials this week declared the spread of bird flu from Asia to Europe a "global threat" and are urging international cooperation to contain the virus. The H5N1 virus, which for now can only be transmitted from birds to humans, has killed 60 people.

Governments are developing containment plans and are seeking to secure stocks of scarce antiviral drugs in case the disease mutates and becomes infectious between humans, which would make it a much more serious threat.

"If it acquires the capacity to co-opt humans as a carrier," says U.S. Health and Human Services Secretary Michael Leavitt, "it will set off a pandemic struggle that will -- or could -- end the lives of millions. And if history holds true, it could alter the culture, the politics and the prosperity of billions more."

A timeline of the spread of the H5N1 bird flu virus:

May 1997: The lethal flu virus H5N1 is isolated from a human patient in Hong Kong. Eighteen people are hospitalized with the disease, six people die. All were in close contact with poultry. Hong Kong immediately kills 1.5 million poultry.

January 2004: The virus kills many birds in China, Japan, Cambodia and Laos; human cases are reported in Thailand and Vietnam, with 10 deaths. U.S. and U.K. laboratories redouble work on developing human vaccines, an effort launched in 2003 with the World Health Organization.

February 2004: Poultry deaths spread to in Indonesia. Human deaths in Vietnam rise to 15.

March 2004: Virus is widespread among bird flocks in Asia. More than 100 million birds have died or been destroyed. Additional human deaths reported in Vietnam and Thailand.

August 2004: Outbreak among birds in Malaysia. China reports avian flu in pigs. The number of human cases rises to 39, all in Vietnam and Thailand, including 28 fatalities.

November 2004: WHO warns of pandemic that could kill millions of people, and says "much of the world is unprepared."

July 2005: Human fatalities in Indonesia. Virus spreads to flocks in Russia and Kazakhstan.

October 2005: Reported human cases since 2003: 117 infections, 60 fatalities. For the first time, avian flu reaches Europe, with bird cases in Romania and Turkey. Greece tests a reported case of bird flu. Russia says virus has spread west toward Moscow, from Siberia. Roche, maker of Tamiflu, an antiviral flu treatment drug, announces plans to open a new plant in the United States and considers issuing licenses for other firms to make the drug.