Accessibility links
Roundtable: Young and Black in America Thursday's topic: What it's like to be young and black in America. Guests: Nat Irvin III aka "Tre", executive producer at Wonderland Productions, a hip-hop music label; Ira Porter, correspondent at The Philadelphia Inquirer; and Kevin Powell, author of Who's Gonna Take the Weight: Manhood, Race, and Power in America.

Thursday's topic: What it's like to be young and black in America. Guests: Nat Irvin III aka "Tre", executive producer at Wonderland Productions, a hip-hop music label; Ira Porter, correspondent at The Philadelphia Inquirer; and Kevin Powell, author of Who's Gonna Take the Weight: Manhood, Race, and Power in America.

When 16-year-old Kayla(ph) heard that Bill Cosby was coming to Compton, she decided to stay after school to see her favorite sitcom star.

KAYLA (Compton, California, Resident): As they show on the Huxtables, he played a doctor or whatever. So, I mean, like, he just gives a lot of good, positive influence out to the black community.

DAVIS: Over the past year, the star of "The Cosby Show" has been constantly on the road, hosting over a dozen meetings nationwide that he calls `call-outs.'

DAVIS: When he finally took the stage at the Compton High School auditorium, the mainly African-American audience gave him a warm welcome.

Mr. BILL COSBY (Actor-Comedian): Thank you. Thank you. We're going to get started...

DAVIS: Cosby, who has a PhD in education, asked Compton Community College President Jamillah Moore about the vocational courses available to students.

Mr. COSBY: OK. What else have you?

Ms. JAMILLAH MOORE (President, Compton Community College): What else do I have? Culinary arts. You want to be a chef?

Mr. COSBY: No, I just want to be a good cook. The difference between a cook and a chef is gravy.

DAVIS: But many of the people in attendance did not come for laughs. Many said they came to hear Cosby's views on the state of black America. He addressed the issue head-on, saying he was mystified by African-American kids who would rather be in the street than on the job.

Mr. COSBY: Many of you old people, like myself, confused by some people who say things like, `Well, I--look, I'm not going to flip burgers. I might as well go out and sell some drugs. And if I get killed, I get killed.' Now that's mind-boggling.

DAVIS: Cosby's frank talks have raised controversy. In May 2004, at a ceremony commemorating Brown vs. Board of Education, the actor used the term `knucklehead' to describe African-American teens who use street slang. Earl Ofari Hutchinson, an LA political activist, says Cosby words reinforce negative stereotypes.

Mr. EARL OFARI HUTCHINSON (Political Activist): It was this broad indictment, saying that all of you, you know, are doing these drugs, joining gangs, essentially are not achieving in school, and your parents are to blame for it. That's where it broke down.

DAVIS: But back at Compton High School, there were nods of approval as Cosby called for African-Americans to take more personal responsibility. He says success is possible, even in cities like Compton that have high crime and few jobs. He points to tennis stars Venus and Serena Williams, who got their start in the city.

Mr. COSBY: Then they started to make some money.

DAVIS: Leaving the auditorium, Tabiza Gaines(ph) holds her two adopted children close. She says she'd been offended by Cosby's remarks last year, but said that the meeting was inspiring.

Ms. TABIZA GAINES (Compton, California, Resident): I came out and how important it is for them to have a place to go, and how to have someone to love them and to reach out to these children and to understand them, to take time to find out where they are and to help them get to where they need to go.

DAVIS: The actor-comedian will stay on the road, hosting more call-outs elsewhere. Cosby says it's a message that needs to be heard, even if some aren't used to hearing it. For NPR News, I'm Jordan Davis.

GORDON: This is NPR News. 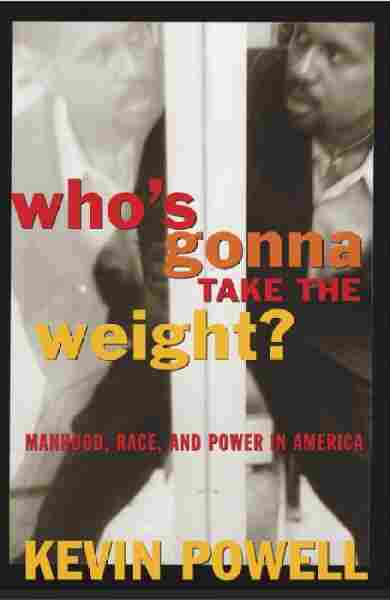 Who's Gonna Take the Weight

Manhood, Race and Power in America