Accessibility links
Legendary Jazz Singer, Pianist Shirley Horn Dies Grammy-winning jazz vocalist and pianist Shirley Horn died Thursday at a nursing home outside Washington, D.C. She was 71. Horn, known for her whispery vocals, won virtually every major jazz award. She was awarded a Grammy in 1998 for a tribute album to her mentor, Davis. 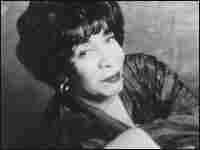 Shirley Horn, who died Thursday, was honored in 2005 by the National Endowment for the Arts as a jazz master. hide caption

Grammy-winning jazz vocalist and pianist Shirley Horn died Thursday at a nursing home outside Washington, D.C. She was 71.

Horn began her career in the 1950s -- and made it big when she opened for Miles Davis in New York City in 1960. Davis, notoriously suspicious of singers, was in love with Horn's whispery voice.

She went on to top the Billboard jazz charts and win virtually every major jazz award, including a Grammy for best jazz vocal performance in 1998. It was for her tribute album to her mentor, Davis.

Some of her heartfelt ballads included "The Very Thought of You," "My Heart Stood Still" and "I Got Lost in His Arms."