Accessibility links
Nickel Creek, Playing with 'Fire' The three young musicians in Nickel Creek are known for their polished traditional bluegrass. But a new CD, Why Should the Fire Die?, takes a darker turn. Sean Watkins, Chris Thile and Sara Watkins visit with Debbie Elliott and play some of their music.

The three young musicians in Nickel Creek are known for their polished traditional bluegrass. But a new CD, Why Should the Fire Die?, takes a darker turn. Sean Watkins, Chris Thile and Sara Watkins visit with Debbie Elliott and play some of their music. 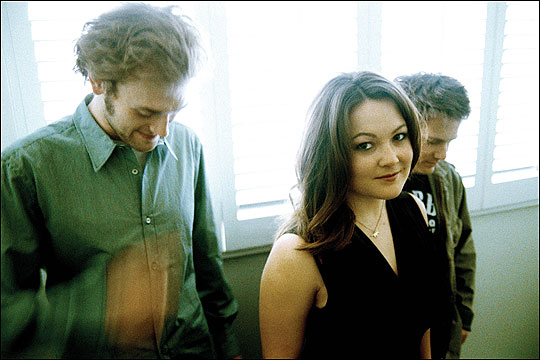 The acoustic band Nickel Creek has been playing together for almost 20 years, pretty impressive considering that they're all under 30. Fiddler Sara Watkins, her brother Sean on guitar and their friend Chris Thile on mandolin are known for their polished interpretations of traditional bluegrass. But on their new CD, "Why Should the Fire Die?", they're trying something a little different. Sean and Sara Watkins and Chris Thile join us now from our NPR West studios in Culver City, California, where they've agreed to play a few songs for us.

Hello. Welcome to the show.

Ms. WATKINS: So nice to talk to you.

ELLIOTT: Likewise. So tell us how you started out playing bluegrass.

Ms. WATKINS: We--our parents took us to see a band that played every Saturday night at a pizza parlor. And we started taking lessons from them individually, and they'd have us up to play tunes and sing songs, and that's how we got to know each other. And then somebody asked for some sort of grouping of young kids to open a festival; they thought it'd be cute.

Ms. WATKINS: And so Sean and Chris and I and a couple of other people...

Mr. WATKINS: It was cute.

Ms. WATKINS: We were cute.

Mr. WATKINS: It was very cute.

ELLIOTT: How old were you?

Ms. WATKINS: Chris had a broken arm, even. That--it was, like, kids and sympathy for you.

ELLIOTT: Yeah. How old were you?

Mr. WATKINS: Chris and Sara were eight and I was 12 when we did our first thing.

ELLIOTT: This new album is somewhat of a stylistic departure for you. For one thing, the songs are rather bleak.

ELLIOTT: Have you guys had some bad breakups recently?

Mr. WATKINS: We had one.

Mr. THILE: Yes. I was married for a year and a half. And although nothing happened during the relationship quite like "Can't Complain" or "Helena," which are two songs where there's infidelity and all kinds of stuff going on, it wasn't near so dramatic as that. It allowed me to approach the vocals I sing on the record with a lot more experience, and, yeah, it's been a little darker recently.

ELLIOTT: Is there a song that exemplifies this sound?

Mr. THILE: The first song on the record, I think, like a sonic thesis statement maybe, it has old and new aspects, so we'll do that. This is a song of mine--me being Chris--called "When In Rome."

(Soundbite of "When In Rome")

Mr. THILE: (Singing) Where can a teacher go whenever she thinks people need the things she knows? Hey, those books you gave us look good on the shelves at home, and they'll burn warm in the fireplace, Teacher, when in Rome.

Grab a blanket, sister, we'll make smoke signals, bring in some new blood. It feels like we're alone. Grab a blanket, brother, so we don't catch cold from one another. I wonder if we're stuck in Rome.

ELLIOTT: That was Nickel Creek playing "When In Rome" from their new CD.

Why did you want to go that direction?

Mr. THILE: I think we felt, listening to our first two records, that there was something a little too polite about them, maybe a little passive. We really wanted to have something that would reach out of the speakers, grab people's ears and sort of wrestle them closer.

ELLIOTT: So what's been the reaction to your new sound?

Mr. WATKINS: It's been great.

Mr. THILE: ...it's a very pleasing reaction. You always have people that you poll. You know, we have peers that we're asking for honest opinions, and I mean, so far it's been remarkably positive. I've been really happy with it. At the same time, now more than ever...

ELLIOTT: And this is Chris?

Mr. THILE: Yes, this is Chris. At the same time, now more than ever, the bluegrass fundamentalists are running for the hills. They are not enjoying the drums, the aggressive nature of a song like "Best of Luck." There are many things that they're not enjoying.

Ms. WATKINS: I bet the harmonic craziness in songs like "Eveline" is pretty scary for them, too.

Mr. WATKINS: A hell of a lot more than three chords there.

NICKEL CREEK: (Singing) Eveline, grips the railing as her lover calls her to the sea. Won't you sail with me?

Mr. THILE: While we were never quite labeled, you know, bluegrass saviors like Alison Krauss was, there was a bit of poster children action going on. And I think that we've left...

Mr. THILE: Yeah. And particularly the first record. The second record to a certain extent, it was very--it was friendly towards the bluegrassers, and--although we were already concerning them.

Ms. WATKINS: We were showing signs of leaving the fold.

Mr. THILE: As Sara was saying, we're embracing all characters of the band, those that spring from bluegrass and country. But then, you know, when it gets darker and when it gets more aggressive, we have to embrace that, too, or you're just going to screw yourself out of some good music.

(Soundbite of "Best of Luck")

Ms. WATKINS: (Singing) She tried as hard as she could, but she knew it wasn't good enough and wouldn't ever be. So she had to start hiding what she felt, but she loved him. He knew it, and if his hands weren't tied, he would've really liked to help her.

NICKEL CREEK: (Singing) Don't touch the best of luck. He's still shaking it off, buying flowers for his wife, guilty he could even think of life without her. Gets home looking like he's seen a ghost. She's ready for the worst, but when he tells her, shes breaks down, crying, `I'm so sorry.' Don't touch, don't look, don't be. Best of luck.

ELLIOTT: Nickel Creek performing "Best of Luck" from NPR West. So we've been talking a lot about how there's a lot of songs on here that are a bit of a departure from what you've done in the past. But there are some instrumentals on "Why Should the Fire Die?" and they've got a bit more traditional sound than some of the others. Was that a conscious choice to have a mix?

Mr. THILE: This is Chris.

Mr. THILE: I think, you know, when start making a record, you have to think in--you have to balance everything. This record is on the heartbreaking side, and so you want some other sides. You know, a song like "Anthony," Sara's song that has a little levity in it, or "Scotch & Chocolate," you know, or "First and Last Waltz," which is dark in a different way because it's more mysterious.

ELLIOTT: Let's go out with the "First and Last Waltz."

ELLIOTT: Chris Thile, Sean Watkins and Sara Watkins of Nickel Creek. They joined us from our NPR West facility in Culver City, California. To hear more music from Nickel Creek, go to our Web site, npr.org.