Accessibility links
Savoring Shirley Horn's Timeless Sound Jazz singer and pianist Shirley Horn's graceful career began in the 1960s, and lasted until her death this week at 71. Her voice and style put her in the ranks of Ella Fitzgerald and Sarah Vaughan.

Jazz singer and pianist Shirley Horn's graceful career began in the 1960s, and lasted until her death this week at 71. Her voice and style put her in the ranks of Ella Fitzgerald and Sarah Vaughan. 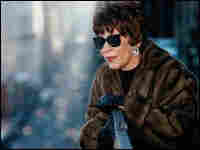 Shirley Horn: She was smooth, and cool, and in a class with Fitzgerald and Vaughan. Larry Busacca hide caption

Jazz vocalist and pianist Shirley Horn died yesterday at the age of 71. Shirley Horn was considered one of the most expressive ballad singers in jazz. NPR's Felix Contreras reports she was a favorite of jazz fans and musicians alike. He has this appreciation.

Shirley Horn's career had two parts. She recorded her first album, "Embers and Ashes," for a small label in 1960. And it might have become a footnote to jazz history had it not been noticed by Miles Davis. In a 1998 NPR interview, she explained that Davis tracked her down while she was visiting family in Virginia.

Ms. SHIRLEY HORN: To this day, I don't know how Miles got that number. So I went to the phone. `Miles,' I said, `how you doing?' `Why don't you come to New York?' And I said, `OK.' And I'm thinking this is some friend of mine playing a joke, right?

CONTRERAS: It was no joke. Davis had a date at the Village Vanguard and would not perform unless Shirley Horn played first.

CONTRERAS: What likely caught Davis' ear was her slow languid approach to ballads; an approach that literally suspended time. Horn achieved that effect, says writer and poet A.B. Spellman, because her piano playing was an integral part of her singing and both worked in service to the meaning of the song.

Mr. A.B. SPELLMAN (Writer, Poet): She was equally competent as a pianist and as a singer. She was a singer you responded to almost immediately. And her self-accompaniment, you did listen to that as well. There was a great deal of music in her piano as she interwove her piano lines with her voice lines.

Ms. HORN: (Singing) You send sparks right through me when I look at you because you're my thrill...

CONTRERAS: Shirley Horn was born in Washington, DC, in 1934. She studied classical music, then developed a passion for jazz, especially ballads.

Ms. HORN: My mother sang love songs. My dad sang love songs to my mother and they loved music. And that's what I heard at home when I was growing up.

CONTRERAS: Horn worked both as a pianist and vocalist at clubs around Washington, but her gigs with Miles Davis raised her profile and led to albums produced by a young arranger named Quincy Jones. She began to get offers to perform around the country. Then she dropped out of sight. She went back home to Washington, DC, to raise her daughter.

Ms. HORN: I wouldn't stay away from home that long. I couldn't. I needed my daughter as much as she needed me. I said let me just chill out until she comes of age. Well, that's what I did.

CONTRERAS: Once her daughter was grown, Shirley Horn got a shot at that rarest of things: a second chance at her career. In the late 1970s and early '80s, she made a pair of recordings for a small label, but by the end of the decade, she was signed to Verve Records.

(Soundbite from "You Won't Forget Me")

CONTRERAS: Shirley Horn was back and, as if to drive the point home, her album, "You Won't Forget Me," featured the musician who helped her in her early days, Miles Davis.

(Soundbite from "You Won't Forget Me")

Ms. HORN: (Singing) ...I'm part of the memories too wonderful to die.

CONTRERAS: The turn of the century brought physical and emotional challenges for Shirley Horn. In 2001, Charles Ables, Horn's bass player for more than 30 years, died. That same year, her right foot was amputated as a result of complications of diabetes. As emotionally revealing as her music was, Shirley Horn was a notoriously reticent interview. She would only share so much about her family and herself. But she did want people to know her music and remember her for it.

Ms. HORN: Remember me with love and remember my music. Try to remember all those pictures I've tried to paint. That would please me.

CONTRERAS: In 1998, Shirley Horn was awarded her first and only Grammy for best jazz vocal performance for the album, "I Remember Miles," her tribute to her old friend. And this year, Horn was recognized by the National Endowment for the Arts with the Jazz Masters Award. Felix Contreras, NPR News.

Ms. HORN: (Singing) Shall I catch a shooting star? Shall I bring it where you are? If you want me to, I will. You can set me any task, I'll do anything you ask if you'll only love me still. If the sun should tumble from...