Accessibility links
The Beatles' 'Rubber Soul' Bounces Back Forty years ago this month, the Beatles began recording Rubber Soul. A new tribute CD features remakes of the landmark album's 14 tracks. Some of the artists weren't even born yet in 1965, when Rubber Soul came out. 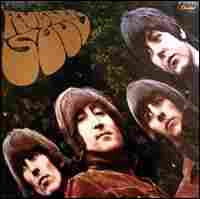 Rubber Soul marked a turning point for the Beatles. "For the first time we began to think of albums as art on their own, as complete entities," producer George Martin said. hide caption

Compare songs from the original Beatles classic 'Rubber Soul' and new versions from 'This Bird Has Flown,' featuring contemporary artists.

If I Needed Someone

If I Needed Someone 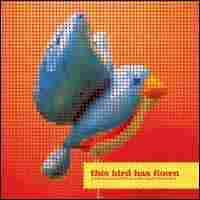 The tribute CD This Bird Has Flown takes its name from an alternate title to "Norwegian Wood." hide caption

From 'All Songs Considered'

The Birth of Beatlemania
The Lost Beatles Tapes

"I'm Looking Through You" featured a "false start" that appeared only on the U.S. version of Rubber Soul. Hear an excerpt:

The first take of "Norwegian Wood (This Bird Has Flown)," recorded Oct. 12, 1965, was issued on The Beatles Anthology released in 1996. Hear an excerpt:

I'm Looking Through You

Norwegian Wood (This Bird Has Flown)

It was 40 years ago this month that the Beatles began recording Rubber Soul and forever changed the sound of music. A new tribute CD, with contemporary artists, features remakes of the 14 original tracks.

Many of the artists on This Bird Has Flown (the alternate title of the song "Norwegian Wood") weren't born yet in 1965, the year Rubber Soul came out.

This time "Norwegian Wood" is performed by the Fiery Furnaces, "Run For Your Life" is done by the Cowboy Junkies and "The Word" is covered by Mindy Smith. Many of the songs are faithful to the originals, but others bury the Beatles under unrecognizable, avant garde performances.

Art Silverman contemplates the new album -- and the original classic -- in an essay below:

The Birth of 'Soul'

A masterpiece can be rushed. The Beatles were racing to meet a deadline when they wrote the songs for Rubber Soul. In 1965 they'd been on one long tour, punctuated by trips to the recording studio and sound stage.

At some point the Beatles hooked up with Bob Dylan. He brought them two things: marijuana and a broader idea of what could be said in popular music. Dylan knew they were great musicians, and could see they were limiting themselves in song content.

Some critics and insiders refer to Rubber Soul as "the pot album," says Steven Stark, author of Meet the Beatles: A Cultural History of the Band That Shook Youth, Gender, and the World. Well, believe me, I know a lot of less talented people who made weed part of their lives, but 40 years later there's little to show for it beyond crumpled bags of junk food in a landfill somewhere.

As the new tribute CD, This Bird Has Flown shows, the Beatles left something more.

Another Beatles aficionado, David Bacon, author of The Beatles' England: There Are Places I'll Remember, said the album was born of a simple obligation: Christmas was coming and new product was needed for the marketplace.

In England, that meant 14 songs for an album. In the States, the record company was stingier. They skimmed off two tunes, added others and re-arranged. But Bacon says the U.S. version of Rubber Soul somehow holds together better, despite its birth in the bowels of commerce.

Beatles producer George Martin said Rubber Soul marked a turning point for the group. "For the first time we began to think of albums as art on their own, as complete entities," he said, according to The Beatles Recording Sessions by Mark Lewisohn.

The re-make This Bird Has Flown follows the U.K. lineup, and thus starts with the rocker "Drive My Car." Bacon says that song seems terribly out of place in the company of the gentler, more reflective masterpieces that follow. ("I've Just Seen a Face" kicked off the U.S. album.)

Rubber Soul might have been born as just one more hurried project for the Beatles, but it's amazingly listenable today. As for me, in 1965 it represented a personal breakthrough. After resisting the lure of the Fab Four out of stubborn, obscure principles for two years, it was the album that broke my will to fight. My sister, Nancy, was right. They were great.

Art Silverman is a senior producer for All Things Considered and has worked for the program since August 1978.

The Beatles Official Site
This Bird Has Flown