Accessibility links
Emergency Housing Need Sparks Creative Designs Natural disasters often leave thousands of people homeless. How to house these people is a problem yet to be convincingly solved. But that hasn't stopped some architects from trying. 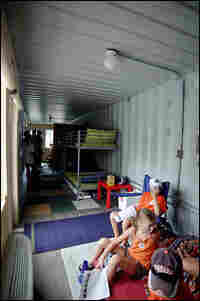 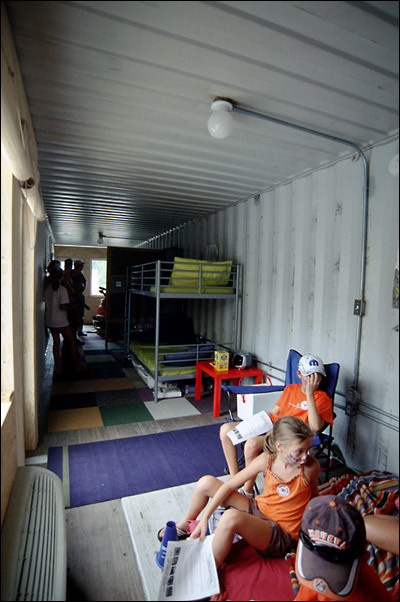 D.K. Ruth has created The Warm, Dry Room out of a surplus shipping container. The emergency shelter contains living and sleeping space, windows and climate control. 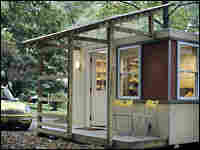 The H.E.L.P. House is eight-feet wide and 12-feet long. It's intended to allow property owners to stay on their lots and start rebuilding right after a disaster. Michael Matsil hide caption

Homelessness on a regional scale is often one result of natural disaster -- whether that's a hurricane in the United States or an earthquake in Pakistan. Architects inspired to meet this challenge with emergency housing solutions have often run into a problem: getting their ideas into the field.

Carib Martin recently built a new house on his property in Bethesda, Md., that he calls the H.E.L.P. house. The acronym stands for Housing Every Last Person.

It took Martin about a week to build his $8,000 emergency house. The structure was designed to go right on the property of a person who has just lost their home, a scheme intended to revive communities quickly.

Building the H.E.L.P. house once was relatively easy. The hard part is getting partners to use it in a real-life disaster.

A nonprofit group called Architecture for Humanity tries to help designers get their projects to those who need it after a natural disaster. Kate Stohr is one of the organization's founders. She says the process can take years.

AFH learned that lesson in 1999, when the organization sponsored a contest to design housing for refugees in war-torn Kosovo. The contest was an initial success, with more than 200 entries coming in. Then Architecture For Humanity learned how long it would take to get any of the entries to Kosovo in big enough numbers to matter.

D.K. Ruth at Auburn University in Alabama says his project has a good chance of success because he is working with state officials to use his concept.

The project is called, "A Warm, Dry Room." It's a shipping container modified to house people for roughly $2,000. Ruth says the governor's support gives him confidence that this project will likely be put to use along the gulf coast when it's finished.

The need for short-term housing is urgent when disaster strikes. Then the it tends to fade as other forms of help arrive. But designers of emergency shelter solutions are patient. They know the need never ends; it just moves from one disaster to another.