Accessibility links
'The Average American' In 2003, author Kevin O'Keefe set out to find the "most-average" American. He talks about his path from overachievement to self-acceptance and what it means to be ordinary in the United States. 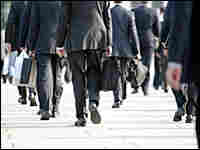 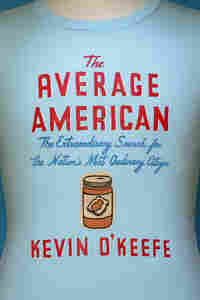 From 'The Average American' hide caption

According to the book, a majority of Americans:

• Eats peanut butter at least once a week

• Can name all Three Stooges

• Lives within a 20-minute drive of a Wal-Mart

• Eats at McDonald's at least once a year

• Takes a shower for approximately 10.4 minutes a day

• Never sings in the shower

• Lives in a house, not an apartment or condominium

• Has fired a gun

• Grew up within 50 miles of current home

In 2003, author Kevin O'Keefe set out to find the "most-average" American. He talked to magicians in Maryland and cattle farmers in Kansas. But in the end, the author returned to his hometown in Connecticut to find what he was looking for. O'Keefe talks about his path from overachievement to self-acceptance and what it means to be ordinary in the United States.

Bob Burns, selected by Kevin O'Keefe as representing The Average American, according to statistics and O'Keefe's journey

"Remember, you're not a young stud anymore," Randy said, handing me a bottle of pills near the railroad tracks where I had parked. "You may want to down a few dozen Advils, my friend." We were near the starting line of the county's annual community marathon.

I was standing with Randy, a cattle farmer and the county's director of noxious weeds, on an avenue in Abilene that he knows well. His office was just down the street. He was born and raised nearby and still resides in the area. His wife and their two kids are also natives. He was a potential Average American candidate; I had already been able to apply a lot of my updated search criteria to him, and he had hit each criterion so far.

The race would start at seven o'clock. As the rain picked up and we walked to the runners' registration table inside a local church hall, Randy continued his good-natured ribbing, burning off some nervous energy in the process. We saw two runners standing under umbrellas. I was donning raingear. Randy, a tall, rangy man who bears a resemblance to Ray Bolger, the actor who played the scarecrow in The Wizard of Oz, was wearing an orange cap, a flimsy cotton sweatshirt, and running shorts. "Here's my theory," he said. "If you're scared of a little rain, then a marathon is no place for you."

I could tell this was going to be an interesting 26.2 miles.

The previous year, Randy Barten had taken to long-distance running with the knowledge that it was a sport in which everyday Americans could feel comfortable participating. Abilene had started an annual marathon that year, but Barten did not feel he was ready for such a long distance. Instead, he had run in the simultaneous half-marathon, a distance he told me he liked "because it was halfway between running the marathon and not running." He had finished the half marathon in the exact middle of the 111-person race -- 56th place. His finish had been the most average of the race, using both the regular and median standard. After reading about the marathon and examining the results, I had tracked Barten down. (He had been unaware of his precise middle-of-the-pack status.) He had accepted my offer to volunteer as his mentor during the marathon.

If you want to get your name in the paper or on the Internet and keep it alive in a public historical databank into perpetuity, all while staying within accepted legal and ethical boundaries, run yourself a marathon. Because ordinary participants can compete in the same event with elite runners, because there are so many more of them, because they are out on the course considerably longer than the top finishers, and because they don't exhibit the negative characteristics that seem to be common with today's millionaire athletes, these everyday people are the stars to the many sponsors that make the competitions possible.

In 2004, after the stock price of American running-shoe manufacturer Saucony had risen 369 percent in less than two years, CEO John Fisher credited the company's praise of the common runner. "The sport has matured to become a people sport," Fisher told USA Today. "The leading marathon runners are fabulous athletes but virtually nondescript. Running is no longer about who wins, but who finishes." At the same time, Saucony competitor New Balance, also a U.S. company, was celebrating increased sales. New Balance CEO Jim Davis pointed to the company's advertising campaign, featuring the slogan, "Endorsed by no one," the message being that the masses are as important as the elite runners. Advertising for the 2004 Chicago Marathon ran with the tagline, "Watch the average person do the extraordinary."

Unusual for a sport with professional competitors, marathoning has been all but taken over by average athletes. When I ran the New York City Marathon a few years ago, I finished 216th overall and 23rd among New Yorkers. Although the event has boomed to include more than 36,500 runners, the largest marathon in the world, my same time would now place me inside the top 100 overall and among the top 10 runners in the state. Marathons pride themselves on being truly equal-opportunity events. Perhaps it's only right that Walt Disney -- whose grand success, as Disney biographer Steven Watts avowed, came from an honest connection with "average Americans and their hopes, fears, and values" -- is the spirit behind the Disney World Marathon in Orlando, which in 2002 had a field that was the same gender distribution as America, down to the exact tenth of a percent.

A detailed 2003 study by the Road Running Information Center concluded that when put together, all American road race participants "mirror the overall population of the U.S." for many reasons. For one, the average age for each falls between thirty-six and thirty-seven years. Incidentally, a detailed nonpartisan analysis of the recreational interests of self-described Democrats and Republicans revealed that the two groups are different from the average American when it comes to sports participation. For example, Republicans are 40 percent more likely to play golf than the U.S. average, and Democrats are 20 percent less likely. However, running (or jogging, if you prefer) is the one activity that the two parties had most in common with the average American, each scoring within 4 percentage points of the norm.

When I first checked out the website of the Abilene marathon, there was only one photo, of an unnamed runner, on the home page -- not of a defending champion, but a competitor who was randomly placed there. He was, also, none other than Barten, decked out in a Kansas State football sweatshirt and grimacing toward the finish line of the half marathon.

Despite the brotherhood of the ordinary in running, I never ran to chat or meet strangers during races. Like everything else I pursued while growing up, there was no time to slow down; I wanted to put all my energy into the sport. In high school in Connecticut, when I was not getting straight A's and realized I would not be the best student in my class, I was intensely determined to find some way of being No. 1. It's the reason that in my high-school yearbook, I have the longest list of after-school activities. After many starts in other fields, I found that I could make a mark in journalism and long-distance running. With an upperclassman, I started a school newspaper that led to my winning a statewide high-school journalism award from the Hartford Courant. As a high-school senior, I went undefeated in cross country, culminating with the state championship. And in my first marathon, I ran the year's fastest time in my age group in New England.

In my drive to excel at something, I had discovered these two interests, media and sports, and they motivated me through an undergraduate degree in journalism and a graduate degree from the nation's leading sports administration program. I wanted to stand out, so, to the surprise of many fellow students in high school, I went to a college in Alabama, in part because my guidance counselor told me that no one else in my school's history had ever enrolled there. Likewise, after completing my degrees I always attempted to move only into positions that could be associated with the top. Within the world's largest public relations conglomerate, I supervised the sports accounts of Philip Morris USA, then the deepest-pocketed corporate sports program in the nation. But while generating exposure for Marlboro's auto-racing team, Virginia Slims Tennis, and other cigarette-sponsored programs, I would not admit to myself or to others that I was promoting a product that killed people. To feel that I was above everyone else was good enough.

This is why, as an adult, running was the only real social outlet I had, and why I only knew how to treat it like work, with the blinders on toward maximum performance. When I finished races and saw competitors coming to the finish line laughing with friends, I didn't get it. I was convinced that they were lazy, not gutting it out to their fullest potential. In 2002, I ran in a 4-mile fun run that had been arranged for sponsors and their guests for the morning after a big New York City event. I went all out and won, no stopping for pleasant banter. A year later, the Hartford Courant ran a story about an old achievement of mine on the front page of the Thanksgiving Day sports section. That morning, the largest annual running race in Connecticut was taking place, and I still held the event's high-school record. I was nursing an injury, but I had promised the newspaper reporter that I would enter the race. And I felt like I always had, pushing it even as I hobbled along among some average runners. They weren't trying hard enough. They were laughing. I was not.

Why couldn't I slow down and enjoy the company of strangers? What was my deal?

Maybe Randy Barten could shine some light. The rain had stopped, and he was having a grand old time shouting hellos to people he knew both in and out of the race. By the time we hit mile one in just under ten minutes, I had said I was impressed that he had introduced me to or pointed out no fewer than twenty of his friends and family members.

One of the buddies, a young man in a tank top, was running a couple strides behind us. "It's Kansas, we all know each other," he deadpanned. 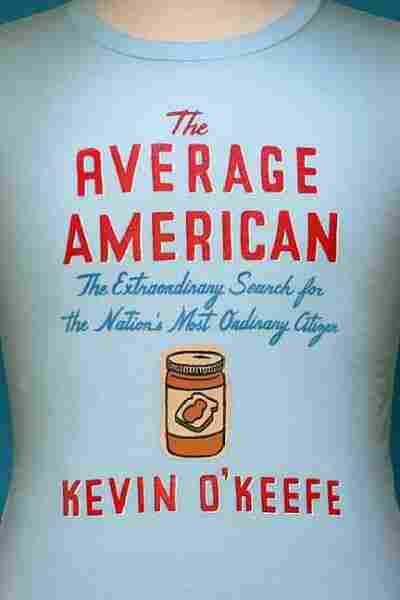 The Extraordinary Search for the Nation's Most Ordinary Citizen