Accessibility links
The Elusive Yet Holy Core In a college anatomy class, public radio listener Kathy Dahlen learned the intricacies of physiology. She found that her study of blood, bone and tissue gave her a deeper appreciation of the body and the soul.

Listen
The Elusive Yet Holy Core

I entered college in the early 1970s and my belief in God and Christ were intact, but it was through an unlikely class that I became convinced beyond dogma of a powerful truth.

Since I was an English major, I immersed myself in ideas and philosophies. But somewhere between Wordsworth's nature poems and Kafka's existential short stories, I felt a need to study something tangible -- something in the world of blood, bones and cells. 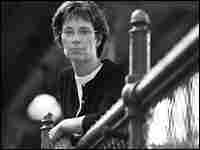 Kathy Dahlen has wanted to be a writer since her seventh grade teacher inspired her to love language. A freelance writer, she is also a volunteer tutor in English as a second language. Dahlen lives in Sequim, Wash., a village on the northern coast of the Olympic peninsula.

So, I signed up for the class "Human Anatomy and Physiology 101." As part of the coursework, our professor took us to an autopsy so we could see first hand what had so far been limited to textbooks and drawings.

When we entered the morgue, our voices dropped to whispers, our eyes drawn to the human parts preserved in jars lining the walls.

In the autopsy room, a male body lay on a stainless steel table. His skin was a waxy yellow, sunken, almost plastic. His mouth gaped.

He was a suicide.

The physician made a bloodless incision. A couple students on the outer rim of the group fainted; I managed to keep my ground and edged closer. There inside, just as we had been taught, were the heart with its ventricles, the stomach still smelling of yeast, the bony frame, the paper-thin coils of intestine.

For some reason, it struck me that all these parts and pieces didn't explain fear or lust, ambition or love. There wasn't an organ I could probe to uncover kindness, or some tissue I could explore to find human will, or the drive to make music.

The doctor folded back a part of the man's scalp and, with an electric saw, cut carefully through the skull. The brain lay exposed as though in a cocoon, creased and wrinkled by thoughts and experiences.

Gazing at that mass of gray nerve tissue, I was unable to reconcile the evidences I had known of self-sacrifice and forgiveness, or even this suicide, with the notion that a human life consists only of one's biology. I know myself well enough to admit to yearnings, imaginings and thoughts that can't be reduced to chemical reactions or electric impulses.

The class, and particularly the autopsy experience, had taken me deeper than I anticipated. I had entered the study of the human body expecting to learn of our concrete physical existence. Instead, I discovered in a more profound way the human body as transitory and fragile, and, by contrast, the soul as enduring.

This elusive, yet holy core whispers to me of God, of my ability to know and enjoy Him. It compels me to look beneath the surface, to remind myself that, like me, the lady next door who scowls on her way to the mailbox, or the kids who strut down the street, or my atheist friend who enjoys a good conversation, each bear an undying soul and deserve compassion.

Brian Greene: Science Nourishes the Mind and the Soul May 30, 2005
William F. Buckley, Jr.: How Is It Possible to Believe in God? May 23, 2005
Kay Redfield Jamison: The Benefits of Restlessness and Jagged Edges June 6, 2005
Azar Nafisi: Mysterious Connections that Link Us Together July 18, 2005