Accessibility links
Beethoven, 'Universal Composer' Edmund Morris' new biography details Beethoven's life, from the cities of Bonn and Vienna where he lived into his professional friendships and rivalries with Haydn, Mozart, Goethe and Napoleon Bonaparte. The book also examines his often difficult relationships with his family and explores his ability to transcend his gathering deafness.

The Bonn of his boyhood was a small, walled, black-and-white city, fifteen miles upriver from Cologne. Exploring Bonn's black streets, hearing its church bells and Gregorian chants, Ludwig acquired a sense of the remote past, palpable yet irretrievable.

Edmund Morris' new biography details the life of Ludwig van Beethoven, from the cities of Bonn and Vienna where he lived into his professional friendships and rivalries with Haydn, Mozart, Goethe and Napoleon Bonaparte. 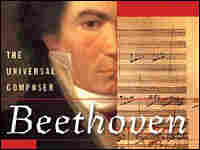 The book explores his difficult family relationships and his struggle with deafness, his eccentricity and his ability to transcend all of that to create great works.

The British playwright Enid Bagnold once asked a feminist what advice she would give to a twenty-three-year-old housewife who, having lost four children, found herself pregnant again by an abusive, alcoholic husband.

"I would urge her to terminate the pregnancy," the feminist replied.

"Then," said Ms. Bagnold, "you would have aborted Beethoven."

She was not quite right in her facts. Only two of those dead infants preceded little Ludwig -- one of them the child of a previous marriage -- and there is no evidence of Johann van Beethoven ever laying violent hands on his wife. But he was certainly a cruel father, and his alcoholism is a matter of court record in Bonn. So is his chronic lack of money, even though Johann was both a salaried singer on the staff of the Elector of Cologne and the son and heir of Kapellmeister Ludwig van Beethoven, a prosperous, retired master of music whose six-room apartment in the Rheingasse sparkled with silver and fine crystal.

Maria Magdalena van Beethoven gave birth to two more sons who survived: Caspar Carl and Nikolaus Johann. She then produced another son and two daughters, all of whom soon died. Her final confinement left her depressed and frail, doomed to expire herself, at forty, of consumption. Slender, earnest-eyed, moralistic, genteel, she floats like a faded watercolor sketch in the van Beethoven family scrapbook, amid more robust images of men of high color and stocky build. If they look more Dutch than Deutsche, these bourgeois Beethovens, if they signed themselves van rather than von, suggestive of noble ancestry in the Low Countries (outside the Flemish medieval village of Betouwe), they were, by the mid-eighteenth century, established around Bonn, administrative capital of the Cologne electorate -- German in culture, Roman Catholic in religion, Rhinelanders in their fondness for the grape.

Ludwig was born in town, at 515 Bonngasse, on or about December 16, 1770. The date is not definite. However, Catholic parishes of the period required neonate babies to be brought to the font within twenty-four hours, and on December 17 his baptism was registered at the church of St. Remigius. The entry, written in Latin, identifies him as "Ludovicus" -- a solemnization of his name that he came to like in later life, after learning about the grandeur that was Rome. Nor, in view of la gloire de la France, did he ever mind being called "Louis."

He also took pleasure in the fact that old Ludwig sponsored his baptism. This made him the godson as well as the grandson of Bonn's most eminent musician. The same dark eyes that looked down on him in the font were to watch again, oil-painted but still lively, when he lay on his deathbed.

Kapellmeister van Beethoven was everything Johann was not: popular, successful, secure at court (he had served the Elector for forty-two years), a conductor of operas and masses, a shrewd businessman. He even sang better than his son, preserving a magnificent bass voice into old age. Oddly, for a man in his position, he was not a composer. He died on Christmas Eve 1773, just in time to imprint himself on young Ludwig's dawning memory. Near and far, the old man would always float in an ambiguous sfumato, his expression kind, his turban cap pushed back. Was the vision primary or just a rearward projection of that oil painting?

The question is pertinent, and not just because Beethoven insisted that his memories of old Ludwig were "vivid." He also bizarrely believed that he had been born two years later than the register stated. Even when presented with an official transcript of the entry, courtesy of the mayor of Bonn, he rejected its "1770" and scrawled on the back, "1772." Friends were unable to shake his fixation. He told them, "There was a brother born before me, who was also named Ludwig . . . but who died."

In this, he was not altogether deluded. His parents had indeed baptized, and buried, a son by that name -- in April 1769. Transferring the name of a dead child to the next born was common practice in Germany. Dates were never Beethoven's strong point, and his father further confused him, by lopping a year off his correct age when advertising him as a child prodigy. Still, a moment's reflection should have made the mature composer realize that being born in "1772" and having "vivid" memories of a grandfather who died one year later made no cognitive sense.

His indulgence of this paradox has been catnip to Freudians. They surmise that Beethoven did not want to look at any certificate legitimizing him, in order to enjoy a rumor that he was the bastard son of Frederick the Great. The story -- widely circulated in his life-time -- was ridiculous. In 1772, Frederick's main squeeze was Poland, not an obscure housewife in Bonn. But Beethoven never issued a public denial. He rather basked in the supposition that royal blood flowed in his veins.

The Bonn of his boyhood was a small, walled, black-and-white city, fifteen miles upriver from Cologne. Its peculiar chiaroscuro came from black lava streets and almost universal lime wash. Even the immense electoral palace was white, dazzling in summer but frigid looking in winter. A gilded town hall added some glitter to the market square, but elsewhere plain plaster gables predominated. One of the few buildings to escape the brush was the old stone Münster. For five centuries, its prodigious steeple had cast a wavering reflection across the Rhine, resisting the river's silvery slide. Older still were the Roman ruins around town. Exploring Bonn's black streets, hearing its church bells and Gregorian chants, Ludwig acquired a sense of the remote past, palpable yet irretrievable.

The foregoing is excerpted from Beethoven by Edmund Morris. All rights reserved. No part of this book may be used or reproduced without written permission from HarperCollins Publishers, 10 East 53rd Street, New York, NY 10022