Accessibility links
How Federal Grand Juries Work The mystery surrounding grand juries, like the one weighing the CIA leak case, is understandable. What goes on behind the closed doors of a grand jury room for the most part remains a secret. 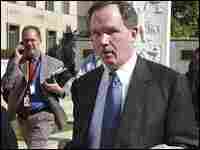 A federal grand jury in Washington is considering whether any crimes were committed when the name of a CIA operative was leaked to the press in 2003. The White House, official Washington and the media are eagerly awaiting news on whether top Bush administration aides will be indicted.

But the goings on behind the closed doors of the grand jury room have remained a mystery.

Grand juries -- first recognized in the Magna Carta, the English legal charter, in 1215 -- have been around for centuries. But their procedures are unfamiliar to most people outside the legal system. The concept of the grand jury was so firmly established in the law that the Founding Fathers provided for grand juries in the Bill of Rights. The Fifth Amendment says that "no person shall be held to answer for a capital, or otherwise infamous crime, unless on a presentment or indictment of a grand jury..."

Accused: The person accused of the commission of a federal crime. Use of this term does not imply the person under investigation is guilty of any crime. After a person is indicted by the grand jury, that person is referred to as the "defendant."

Charge to the Grand Jury: Given by the judge presiding over the selection and organization of the grand jury, the charge is the court's instructions to the grand jury as to its duties, functions, and obligations, and how to best perform them.

Evidence: Testimony of witnesses, documents, and exhibits as presented to the grand jury by an attorney for the government or otherwise properly brought before it. In some instances, the person under investigation may also testify.

Grand Jurors' Immunity: Immunity is granted to all grand jurors for their authorized actions while serving on a federal grand jury and means that no grand juror may be penalized for actions taken within the scope of his or her service as a grand juror.

Indictment: The written formal charge of a crime by the grand jury, returned when 12 or more grand jurors vote in favor of it.

"No Bill": Also referred to as "not a true bill," the "no bill" is the decision by the grand jury not to indict a person.

Probable Cause: The finding necessary in order to return an indictment against a person accused of a federal crime. A finding of probable cause is proper only when the evidence presented to the grand jury, without any explanation being offered by the accused, persuades 12 or more grand jurors that a federal crime has probably been committed by the person accused.

Quorum for Grand Jury to Conduct Business: Sixteen of the 23 members of a federal grand jury must at all times be present at a grand jury session in order for the grand jury to be able to conduct business.

There are several reasons why grand jury proceedings are a mystery. Witnesses appearing before a grand jury have a right to an attorney, but the lawyer must stay outside the room.

The evidence is presented to the grand jurors by the prosecuting attorney, but a judge is not present. So there's no one to raise an objection -- or to consider it.

Like trial juries, grand jury deliberations are conducted in secret. Only the grand jury, the prosecutor, the witness under examination, the court reporter and an interpreter (if one is required) may be present in the grand jury room.

But unlike a trial jury, a grand jury does not determine guilt or innocence -- only whether there's probable cause to believe a person or persons committed a crime. Whereas a trial jury reaches a verdict on whether the accused is convicted or acquitted, a grand jury can decide whether to bring charges via a written indictment.

A witness may ask to leave the room to speak with their attorney but the lawyer is at a disadvantage, having not heard the proceedings. A witness may also invoke the Fifth Amendment privilege against self-incrimination and refuse to answer a question.

Federal grand juries are composed of 16 to 23 individuals selected at random "from a fair cross section of the community" in the district in which the grand jury convenes, according to the Federal Grand Jury Handbook. The names are generally drawn from lists of registered voters. Twelve of the minimum 16 members required to be present must vote in favor of an indictment before it can be returned.