Accessibility links
White Sox Win First World Series Since 1917 Wednesday night, the Chicago White Sox won their first World Series in 88 years with a 1-0 victory over the Houston Astros. Jermaine Dye, who drove in the final game's only run, was named series MVP. The White Sox swept the series in four games.

Wednesday night, the Chicago White Sox won their first World Series in 88 years with a 1-0 victory over the Houston Astros. Jermaine Dye, who drove in the final game's only run, was named series MVP. The White Sox swept the series in four games. 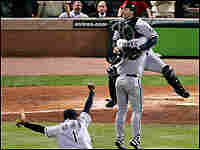 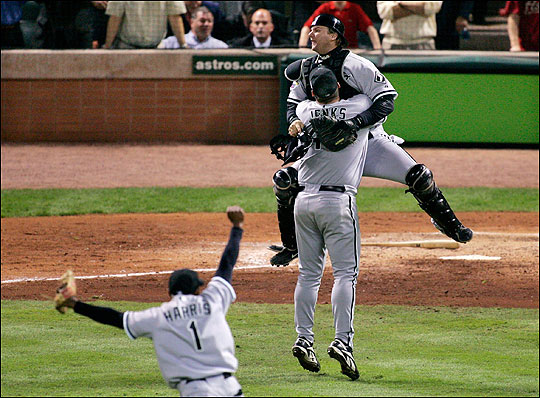 Down here at Houston's Minute Maid Park, they've got a thing about bees.

GOLDMAN: Every time one of the Astros with a B name comes to the plate, Biggio, Berkman, Bagwell, Burke, the PA system buzzes like a bunch of angry killer bees. It's what those players have been nicknamed, but last night, there was another more significant B word in the air: belief.

GOLDMAN: Desperate Astro fans erupted in the seventh inning when Houston starting pitcher Brandon Backe, another B guy, struck out a Chicago batter that ended a very tense inning with White Sox runners stranded on second and third base. The strikeout preserved the scoreless tie and kept those fans believing their team could be the first in World Series history to come back from a three-games-to-none deficit.

GOLDMAN: That's Jermaine Dye, with a D, the first letter in disbelief, which is what the fans experienced when an inning later the Chicago outfielder hit a single off Houston relief pitcher Brad Lidge, driving in the first and only run of the game.

Mr. BRAD LIDGE (Relief Pitcher, Houston Astros): I had a game plan of going up there knowing he's going to throw a lot of sliders and just tried to stay back and just tried to get a slider up in the zone and just hit it hard somewhere and found a hole right up the middle.

GOLDMAN: Dye won the series MVP award. He was the star du jour on a team that seemed to pass that title around every game. White Sox third baseman Joe Crede was the star of game one with his tie-breaking home run. Last night he spoke to reporters about the White Sox's versatility and depth.

Mr. JOE CREDE (Third Baseman, White Sox): You know, it's a testament to our pitching and our bullpen and our timely hitting. We've got a lot of clutch guys on this team. You know, even our bench guys, you know, they're coming through, and it always takes a team effort and we definitely showed it this year.

GOLDMAN: Standing off to the side, Frank Thomas watched the party and smiled. He's the veteran player whose been the face of the White Sox for so many years, but injuries kept him out of the Series and much of the season. With a trash bag protecting his broken left foot from the champagne and beer flying all around, Thomas gazed at the winner's trophy and called it a beautiful thing.

GOLDMAN: Before Thomas got a chance to touch the trophy, teammates whisked it out of the clubhouse and back onto the field, where the celebration continued with friends, family and Chicago fans who'd traveled to Houston. Outside Minute Maid Park, the Astros' faithful headed slowly for their cars. It had been a spirited and sometimes testy couple of days in Texas. There'd been talk about grand conspiracies aiding the White Sox, from favorable umpire calls to baseball's decision to go against the Astros' wish and keep the park's retractable roof open during the games, but Houston resident Warren Holmes(ph), wearing a red Astros jersey and a cap and tired smile, said the White Sox deserved the championship.

Mr. WARREN HOLMES (Houston Resident): The calls go both ways. You get some, you lose some. I think the White Sox definitely had some plays that went their way. In these kind of situations, good luck begets good luck or hard work begets good luck, and they had it going and hats off to them.

GOLDMAN: Last night, the White Sox won for the first time since 1917. Last year, the Boston Red Sox won the World Series for the first time since 1918. It appears baseball is in serious redemption mode. Could the Chicago Cubs, winless since 1908, complete the trifecta next year? Who knows? At least for now, the traditionally second fiddle White Sox are the toast of Chicago.