Accessibility links
Why Miers Withdrew as Supreme Court Nominee White House counsel Harriet Miers, President Bush's nominee to succeed Justice Sandra Day O'Connor on the Supreme Court, has withdrawn as a candidate for the position. Miers faced criticism from both Democrats and Republicans. 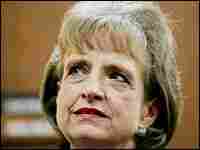 Miers, shown here Oct. 17, said she was concerned that the confirmation process "would create a burden for the White House and our staff that is not in the best interest of the country." Corbis hide caption

"Today, I have reluctantly accepted Harriet Miers decision to withdraw her nomination to the Supreme Court of the United States.

I nominated Harriet Miers to the Supreme Court because of her extraordinary legal experience, her character, and her conservative judicial philosophy. Throughout her career, she has gained the respect and admiration of her fellow attorneys. She has earned a reputation for fairness and total integrity. She has been a leader and a pioneer in the American legal profession. She has worked in important positions in state and local government and in the bar. And for the last five years, she has served with distinction and honor in critical positions in the Executive Branch.

I understand and share her concern, however, about the current state of the Supreme Court confirmation process. It is clear that senators would not be satisfied until they gained access to internal documents concerning advice provided during her tenure at the White House disclosures that would undermine a president's ability to receive candid counsel. Harriet Miers' decision demonstrates her deep respect for this essential aspect of the constitutional separation of powers and confirms my deep respect and admiration for her.

I am grateful for Harriet Miers' friendship and devotion to our country. And I am honored that she will continue to serve our nation as White House Counsel.

My responsibility to fill this vacancy remains. I will do so in a timely manner."

WASHINGTON -- President Bush says Harriet Miers asked him to withdraw her Supreme Court nomination because of Senate pressure to release internal White House documents in which she offered him confidential advice. But the president's nomination of his White House counsel, who had no prior experience as a judge, faced opposition almost from the moment it was announced.

In a letter to President Bush, Miers writes that her nomination has become a "burden" to the White House.

Much of the opposition came not from Democrats but from conservatives in Mr. Bush's own party. Pro-life activists in particular complained that Miers had no track record of publicly opposing abortion. They considered her an unreliable choice to help overturn the Roe v. Wade decision legalizing abortion. Even after the White House released a dozen boxes of documents, including a questionnaire in which Miers indicated her support for overturning Roe v. Wade, conservative Christians remained unsatisfied. The questionnaire, after all, was filled out just months after Miers sent a contribution to both Al Gore's 1988 presidential campaign and the Democratic National Committee.

Such opposition from within the conservative movement was all but unheard of before Miers was nominated. But from the moment she was named, "a lot of conservatives filed for divorce from this administration," said Ramesh Ponnuru, editor of the National Review magazine. "They are no longer seeing its fortunes as their fortunes and its setbacks as their setbacks."

Their reasons for opposing Miers extended beyond the abortion issue. Conservative legal scholars, such as former Supreme Court nominee Robert Bork, complained that Miers had no experience with constitutional law and no known judicial philosophy to guide her thinking on important issues, such as private property rights and religious freedom.

"With a single stroke -- the nomination of Harriet Miers -- the president has damaged the prospects for reform of a left-leaning and imperialistic Supreme Court, taken the heart out of a rising generation of constitutional scholars, and widened the fissures within the conservative movement," Bork wrote in a Wall Street Journal op-ed piece. "There is, to say the least, a heavy presumption that Ms. Miers, though undoubtedly possessed of many sterling qualities, is not qualified to be on the Supreme Court."

Moreover, some critics complained that Miers' nomination had less to do with her qualifications than with her close relationship with Mr. Bush. "If one omits the jobs that were given to her by President Bush ... all you have left is a corporate attorney who has shown an ability for administration," Ronald J. Pestritto, of the conservative think tank, The Claremont Institute, recently noted in one of a slew of negative web postings on the Miers nomination. "The substantial weight of the evidence of her capacity to be a justice -- that is, the key government positions she has held -- are all the fruits of her continuing relationship with the president. If this doesn't raise serious questions about cronyism, I'm not sure what does."

In the end, however, it was a growing drumbeat of concerns voiced by Republican senators that doomed Miers' nomination. Among those were religious conservatives like Sen. Rick Santorum of Pennsylvania, who complained to that President Bush had nominated a "blank slate."

"I'm disappointed he wanted to nominate someone like that instead of someone with a record," Santorum told the Public Opinion newspaper in Chambersburg, Penn., in mid- October.

Others were similarly circumspect about Miers qualifications, such as Mississippi Sen. Trent Lott, who said he "cannot get excited about her selection."

Democrats, too, voiced concern over Miers' qualifications. Yet many were happy to let the Republicans sink the nomination on their own. Some even defended Miers against the increasingly sharp criticisms from conservatives. "The way she's been beaten up by the far right is very sexist," Sen. Dianne Feinstein told CNN. "People should hold their fire, and give people an opportunity to come before a hearing."

Yet the release of a 1989 survey of her views on abortion, in which Mier not only vowed to back a constitutional amendment against abortion, but also to take to the streets in support of it, turned even Feinstein against the nominee, while at the same time failing to assure conservatives of her intentions.

Meanwhile, Senators Arlen Spector and Patrick Leahy, the Republican and Democratic leaders of the Senate Judiciary Committee, voiced their disappointment in Miers' 56-page response to questions about her judicial experience and philosophy. Calling her answers "incomplete" and "insulting," they demanded that she re-do the questionnaire, and also asked for additional documents from her tenure at the White House.

With Miers' nomination clearly in trouble, the request gave the White House an "out." President Bush could avoid the embarrassment of withdrawing the nomination due to an inability to win over the Senate, and instead blame the withdrawal on the necessity to keep sensitive information confidential.

Finally, on the day she was to resubmit the questionnaire to the Senate, Miers instead met with the president and told him she wished him to withdraw her nomination. "I share your commitment to appointing judges with a conservative judicial philosophy," she wrote in a letter to the president on Thursday. "I look forward to continuing to support your efforts to provide the American people judges who with interpret the law, not make it."