Accessibility links
Q & A: Miers Withdraws; What's Next? From the outset, President Bush's nomination of Harriet Miers to the Supreme Court revealed a public rift with his conservative base. Mara Liasson looks at how Miers' withdrawal will affect the president politically and what qualifications he might seek in the next high court nominee 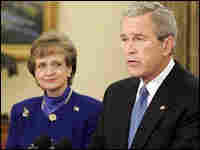 From the outset, President Bush's nomination of Harriet Miers to the Supreme Court revealed a public rift with his conservative base. National Political Correspondent Mara Liasson looks at how Miers' withdrawal will affect the president politically and what qualifications he might seek in the next high court nominee.

It's certainly not unprecedented for a Supreme Court nominee to be defeated or to withdraw. So is President Bush really going to be wounded politically by the Harriet Miers nomination?

It depends on who you ask. Conservatives think this will help him politically for the moment because it lances the political boil that the Miers nomination had become to the president's conservative base. Sen. Trent Lott (R-MS) summed it up when he said that the nomination had been a bad idea. "Let's move on," Lott said after Miers withdrew her nomination. "In a month, who will remember the name Harriet Miers?" Democrats, on the other hand, are saying that the president has caved in to the far right, who were demanding that her nomination be withdrawn.

Might the president recover with his next Supreme Court appointment?

He certainly might recover some support from conservatives who were alienated and angered by the Miers nomination. Some of them will never regain their confidence in the Bush administration. But others will come back to the fold if the next nominee is to their liking.

Has this nomination changed anything in the relationship Mr. Bush has with conservatives?

Yes. For many conservatives the Miers nomination was the final straw. They had held their tongues on many policies that they disagreed with -- large budget deficits, an education bill that gave more control to the federal government, his signing of the campaign finance law, his response to Hurricane Katrina, his immigration policies. And that's because they were united in anticipation of their greatest priority, which is moving the Supreme Court to the right. The Miers nomination unleashed a torrent of criticism from this otherwise loyal constituency of President Bush's. For some conservatives, the breach will be beyond repair, no matter whom he nominates next.

So where do conservatives go from here?

I think the Miers nomination represents a political watershed for the conservative coalition. For many conservatives the post-Bush era has begun. They are looking to the future now, and are more concerned about what comes next than with supporting this administration's policies. There will be a fight for the soul of the Republican Party -- certainly in the battle for the next Republican presidential nominee in 2008. And you will hear a lot of discussion about what kind of conservatism the GOP should embrace.

Would you expect conservatives to have an even more influential role in shaping the next nomination?

Yes. This president has always followed one overarching rule -- avoid alienating your base. That rule has worked for him through several election cycles. The Miers nomination was not the only time he deviated from it, but for many conservatives it was a deviation that went too far. Now that he's seen the consequences, I'm sure he will nominate someone who will be more acceptable to the conservative base of this party than Miers was.

What do you make of the fact that access to White House documents keeps coming up in the confirmation process? It was an issue when President Bush nominated John Bolton as U.S. ambassador to the United Nations and it was an issue in the Miers nomination.

It turned out that the brewing fight for documents provided the perfect exit strategy for a nomination that was already in trouble. Conservative columnist Charles Krauthammer, who was a Miers opponent, laid all this out two weeks ago, saying this would be an excuse for a gracious exit for Miers. The fight over Bolton's documents was between the White House and Democrats. The difference in Miers' case was that Republicans also wanted access to those documents. The real reason Miers withdrew was that she did not have enough support among Republican senators. She had many private meetings with them this week and she was not impressive or forthcoming enough to prompt more than four of them to come out in support of her. (They were Lindsey Graham of South Carolina, Orrin Hatch of Utah, and the two Texas senators -- John Cornyn and Kay Bailey Hutchison.)

What type of qualifications or background might President Bush look to for the next Supreme Court nominee?

I think he will look for someone who could not be called a "crony," someone who has judicial experience and credentials, and is acceptable to conservatives. If possible -- and this is a tall order -- he would also like to find someone who has no paper trail on the abortion issue so that the nominee is not radioactive to Democrats.

While a lot depends on who the next nominee is, what role do you expect Democrats to play the next time around?

Democrats were expected to oppose Miers in larger numbers than the 22 who voted against John Roberts. I think that's still true no matter who the president sends up next. The excruciating political problem for Democrats is they were enjoying watching Republicans form a circular firing squad. But they know that whoever the president nominates next will probably be too conservative for their taste. They will be back to the dilemma that they always had, which is how do they round up enough votes to stop a nominee who will probably get votes from the 55 Republican senators and some votes from moderate Democrats. The Miers episode has been a delightful dream for Democrats, now they have to wake up and confront reality.

Is he likely to nominate a woman again?

I think the president -- with backing from Mrs. Bush -- will still want to nominate a woman or a minority. But it's impossible to tell at this point how he will weigh that against the need to find someone who has the right credentials, is supported by conservatives and can be confirmed.