Accessibility links
The Death of an Iraqi Prisoner Manadel al-Jamadi died in Abu Ghraib, just hours after his capture by Navy SEALs and the CIA. His death was ruled a homicide. A special report investigates what happened just before Jamadi's collapse.

Listen
The Death of an Iraqi Prisoner 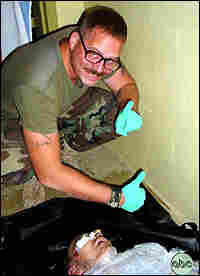 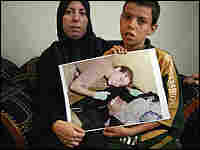 Jamadi's wife and son hold a photo of an American GI grinning over his corpse. Karim Ben Khelifa hide caption 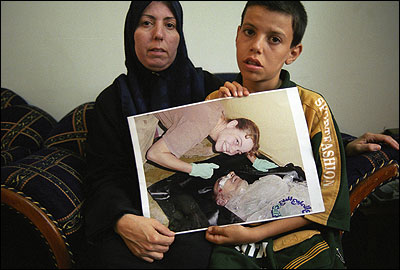 Jamadi's wife and son hold a photo of an American GI grinning over his corpse. 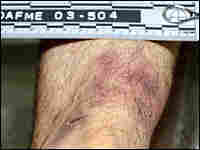 An autopsy photo shows extensive bruising on Jamadi's wrists. In the hour before his death, Jamadi's arms were stretched directly behind him, with his wrists shackled to window bars. Armed Forces Institute of Pathology hide caption

An autopsy photo shows extensive bruising on Jamadi's wrists. In the hour before his death, Jamadi's arms were stretched directly behind him, with his wrists shackled to window bars.

Photographs of grinning GIs crouched over the iced-down, battered corpse of Manadel al-Jamadi were among the most horrific images of the 2003 Abu Ghraib prison scandal. The photos became one of the most powerful symbols for those who opposed to the American invasion of Iraq.

Q & A: The CIA and Detainees

The Iraqi insurgent died within hours of his capture, while being interrogated by the CIA. A military autopsy ruled Jamadi's death a homicide, but no one has been held accountable for his death.

An NPR special report recounts the final hours of Jamadi's life, compiled from a review of thousands of CIA and military documents. Interviews with those present the night he died reveal the techniques used to extract information from Jamadi, and also show a discrepancy between military police and CIA agents about what happened just before his death.

The assignment was clear: kill or capture Jamadi. The CIA had identified the Iraqi as a former officer in Saddam Hussein's army and a key leader of a terrorist cell. He was also considered a suspect in an attack on the al-Rashid Hotel during a visit by Deputy Secretary of Defense Paul Wolfowitz in October 2003.

At 2 a.m. on Nov. 4, 2003, a convoy of humvees and blacked-out CIA Chevy Suburbans entered a deserted street in a hostile Baghdad suburb. The humvees stopped in front of a three-story apartment building, and a platoon of Navy SEALs tumbled out of the humvees and raced up the stairs.

SEAL Dan Cerrillo described the capture to CIA investigators six months later. As Cerrillo placed a charge on the apartment, the door opened. Cerrillo rushed the door, striking Jamadi with it.

Then, according to the report, Cerrillo hit Jamadi "in the face with two fists and attempted to wrestle the subject to the ground, but Jamadi resisted and they engaged in hand-to-hand combat." After a considerable struggle, Jamadi was eventually subdued and cuffed by Cerrillo, a hood was placed over his head, and he was taken first to an Army base, then to the SEALS field base, known as Camp Jenny Pozzi.

Jamadi was interrogated there for nearly an hour and a half. Eyewitnesses interviewed by CIA investigators say Jamadi was seated and stripped, and cold water was poured over him. A Navy SEAL said at one point, the interrogator leaned into a pressure point on Jamadi's chest with his foreman.

Jamadi was then moved to Abu Ghraib for further interrogation. At the prison, MPs stretched Jamadi's arms directly behind him and shackled his wrists to window bars. If the arms bear the full weight of the body, the position can be extremely painful. But MPs later told CIA investigators that Jamadi had been given enough slack to kneel or stand.

During this new round of questioning by CIA agents, Jamadi slumped forward, with his weight on his shackled wrists. MPs, while trying to reposition Jamadi, discovered he was dead. His death occurred within five-and-a-half hours of his capture.

Nearly two years later, the CIA is still investigating Jamadi's death. A military autopsy labeled his death a homicide, due to "blunt force trauma to the torso complicated by compromised respiration."

Autopsy photos show lacerations and multiple bruises on Jamadi's feet, thighs and arms. His most significant injuries -- five broken ribs -- are not visible in the photos. There were no bruises in that area, leading military medical examiners to say that the fractures were probably caused by a slow, deliberate application of force, such as someone kneeling on his chest.

How Jamadi was shackled "makes it very difficult to breathe because you are suspended in a very awkward position," Donoghue told NPR. "When you combine it with having the hood over your head and having broken ribs, it's fairly clear that this death was caused by asphyxia because he couldn't breathe properly," said Donoghue.

It remains unclear at what point Jamadi's ribs were broken.

Military officials who investigated the Abu Ghraib scandal made it clear that at the time of Jamadi's interrogation, the CIA was playing outside the rules.

A 2004 report by Major General George Fay concluded: "CIA detention and interrogation practices led to a loss of accountability, abuse, reduced interagency cooperation, and an unhealthy mystique that further poisoned the atmosphere at Abu Ghraib."

The SEALs denied hitting Jamadi with enough force during his capture and transport to cause any lethal injury. The leader of the SEAL platoon, Lt. Andrew Ledford, was acquitted on charges of dereliction of duty for allowing his men to beat Jamadi. Careers were wrecked but no one was convicted of a crime. No action has been taken by the CIA.

Human rights groups and some members of Congress have expressed frustration with the slow pace of the CIA's response in this and other cases of alleged detainee abuse by the agency. In an Army trial scheduled for December, the CIA will again be under scrutiny for its role in the death of an Iraqi general, who was stuffed into a sleeping bag and died, according to an autopsy, of asphyxia due to smothering and chest compression.