Accessibility links
'Light on Life': B.K.S. Iyengar's Yoga Insights B.K.S Iyengar is considered the world's greatest living yoga master, and at the age of 87, he can still stand on his head and hold a conversation at the same time. His new book charts his personal journey to mental and physical well-being. 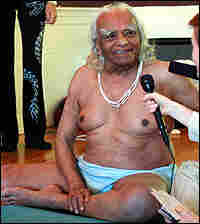 The yoga master, who some say is responsible for popularizing yoga in America, discusses the benefits of the ancient art with NPR's Allison Aubrey. Martin Branding/IYNAUS hide caption

Scientists have been trying to measure some of yoga's effects on health, and have discovered some interesting results:

• Studies by the Oregon Health and Sciences University found that a six-month Iyengar yoga program helped people with multiple sclerosis combat fatigue, and also improved the energy level and quality of life of healthy seniors.

• According to an article in the Journal of the American Medical Association, doing yoga helped improve grip strength and reduce pain in patients with carpal tunnel syndrome.

• Adult asthma patients practiced yoga in clinical trials to help reduce the use of inhalers and induce more relaxed and positive attitudes.

• Transcendental Meditation, which is associated with yoga practice, was found to reduce stress, lower blood pressure and is more effective than heart disease education programs in reducing fatty buildup in arteries, according to a study in the journal Stroke.

• Consistent yoga practice was the requirement underlying these studies.

"Physical health is not a commodity to be bargained for," writes B.K.S. Iyengar. "Nor can it be swallowed in the form of drugs and pills — it has to be earned through sweat. It is something that we must build up."

Quotes from Light on Life: The Yoga Journey to Wholeness, Inner Peace, and Ultimate Freedom by B.K.S. Iyengar, courtesy of Rodale, Inc.

B.K.S Iyengar is considered the world's greatest living yoga master. He refined and perfected the technique of doing yoga poses that is most widely taught in the United States.

Iyengar began life as a frail and sickly child -- but now, at the ripe age of 87, the yoga master can still stand on his head and hold a conversation at the same time.

In his latest book, Light on Life, he recounts how physical weaknesses led him to the ancient practice of yoga:

"My poor health was matched, as it often is when one is sick, by my poor mood," he writes. "A deep melancholy often overtook me, and at times I asked myself whether life was worth the trouble of living.

"Seeing that the general state of my health was so poor, my brother-in-law recommended a stiff regime of yoga practice to knock me into shape and strengthen me up to face life's trials and challenges as I approached adulthood."

Over the next seven decades, Iyengar used his own body as a living laboratory to explore how different yoga postures -- called asanas -- can alleviate health problems. He used props like ropes, belts and bricks to help even the elderly, weak, and inflexible experience yoga's therapeutic effects.

But Iyengar says yoga goes beyond the physical motions: "The practice of yogasana for the sake of health, to keep fit, or to maintain flexibility is the external practice of yoga," he continues in Light on Life.

"Often, we hear people saying they remain active and light when they do just a little bit of asana practice. When a raw beginner experiences this state of well-being, it is not merely the external or anatomical effects of yoga. It is also about the internal physiological and psychological effects of the practice." 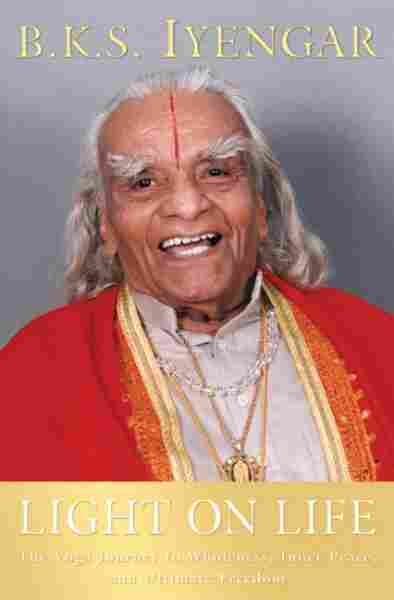 The Yoga Journey to Wholeness, Inner Peace, And Ultimate Freedom