Accessibility links
In Brazil, a New Effort to Wipe Out Hookworm Hookworm, a chronic infection that causes anemia and malnutrition, was once a problem in the U.S. Now, it's a disease of the world's poorest. A small band of scientists are working on a vaccine, with the help of a community in Brazil.

Listen
In Brazil, a New Effort to Wipe Out Hookworm 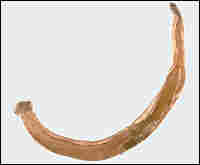 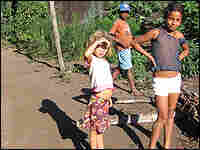 Children living outside the Brazilian village of Americaninhas. About 75 percent of people living in the area are infected with hookworm. The effects of the disease -- malnutrition and anemia -- are worse in children. Brigid McCarthy, NPR hide caption

The interior of the Brazilian state of Minas Gerais is gorgeous. Soaring black stone cliffs jut out from rolling hills. It's dry and dusty in early October, but vegetation is still lush. On small farms, you can see banana palms, coffee plants and manioc. Cattle are plentiful.

The people here are poor. Tucked among the hills are small clusters of one-room houses. Some are sturdy, made from adobe or dried mud. But others are just a rickety collection of logs with leaves and branches for roofs.

Children in T-shirts and shorts scamper around, blowing whistles or chewing on sugar cane. One little boy is pushing a bike wheel with a forked stick, clearly a prized toy. They are small for their age, and several have distended bellies -- a sign of malnutrition.

That's because there's a problem here: Three-fourths of the people in the region are infected with hookworm.

Jeff Bethony, a tropical disease expert at George Washington University in Washington, D.C., has been working in Minas Gerais for more than a year. He calls himself a foot soldier in the war on hookworm.

Hookworm is an intestinal parasite. The worm larvae live in the soil, and pass directly through the skin. Infection comes from acts as simple as walking barefoot on contaminated soil or kneeling down to pull a weed or plant a vegetable.

Once the larvae get in, they migrate to the intestines, where they clamp on with their sharp, jagged mouth parts and start sucking their victims blood like internal leeches. As adults, the worms are about a half-inch long.

The more worms a person is infected with, the more severe the anemia and malnutrition. To make matters worse, the worms lay eggs, which come out in the feces.

There are no bathrooms in these rural areas, not even outhouses, so the eggs spread through the soil. There they hatch into larvae, and the vicious cycle of infection continues.

Hookworm is unknown in the United States today, but that wasn't always the case. The parasite used to be endemic in the South and Atlantic coastal regions. Better sanitation and a higher standard of living have eradicated hookworm disease in this country, although dogs sometimes still get infected.

But worldwide it's a different story. By some estimates, 740 million people are infected. It rarely kills, but it causes a terrible burden of malnutrition and severe anemia, especially in children.

Hookworm is a chronic infection. In other words, it doesn't go away unless treated. Often, those infected don't realize how sick they are until they are treated.

Maria Jaraous, 67, has 13 children and scores of grandchildren, all living in walking distance. A year ago, Jaraous took drugs that killed the worms. Only after the treatment did she know what it was like to feel well.

"I couldn't walk up the hill, my arms and legs were very weak. And now I feel much better, and can walk everywhere," she says.

Children are even more vulnerable. The worm doesn't just stunt growth. The anemia and malnutrition caused by the parasitic infection affect the brain, making learning difficult.

Giovanni Mas Silva is a 26-year-old school teacher in the area. Her students were given medication a year ago. She sees a noticeable difference in her classroom.

"They're doing a lot better now, understand more what I explain, and are doing better on tests," she says. "And they're more active. They play football, they run around, they really enjoy playing more."

The drugs to treat hookworm are cheap, and they work. The trouble is they don't protect people from getting re-infected. And in remote areas like the north of the Minas Gerais state, people seldom, if ever, get treated.

But first he needs to know precisely how common hookworm is in this area. A year ago he provided drugs to about 1,700 people living here.

In a month, he'll start testing them to see how many are re-infected. He knows quite a few will be.

This is not easy work. Communities are not that far apart, but the roads connecting them are narrow, steep and badly rutted. In the rainy season, they're treacherous. Just getting blood samples to a lab takes hours.

"It's hard and it's time consuming and it uses a lot of material," says Bethony. "But the value is that this is an area where there was a lot of infection. And these are the people that really the vaccine is made for."

The job of making a vaccine belongs to Bethony's boss, Peter Hotez, a professor at George Washington University.

If Bethony is the foot soldier in the war on hookworm, Hotez is the general.

Ever since he was a schoolboy, Hotez has been fascinated by parasites. When he went for a combined M.D./Ph.D. degree, he decided to focus on hookworm because, basically, no on else was.

"The problem is let's remember who gets hookworm: It's the poorest of the poor," says Hotez. "So although there's a huge market for a hookworm vaccine, the commercial market is zero."

A few years ago, Hotez convinced the Bill and Melinda Gates Foundation to back his plans for a vaccine. So far, the foundation has given $40 million to the project. Before that money came through, Hotez didn't know how he was going to pay for a vaccine.

"We even considered developing a veterinary vaccine for dogs," says Hotez. Any profits would be siphoned off and used to make a human hookworm vaccine. "Sadly, the commercial market for veterinary products is far bigger than the market for products for neglected human tropical diseases," says Hotez.

Now he has developed a human vaccine. Instead of collaborating with a pharmaceutical company, Hotez is working with the non-profit Sabin Vaccine Institute. The vaccine is being tested now in healthy volunteers in America. If it proves safe, and things are looking good so far, Hotez will send the vaccine to Brazil where it will be tested on people exposed to hookworm.

China and India may have a bigger problem with hookworm than Brazil, but the Brazilian government has promised to manufacture the vaccine if it's successful, so Hotez and his colleagues decided to work there first.

Bethony is working long hours back in Brazil preparing for the upcoming vaccine study. Bethony knows there's a real possibility that the vaccine being tested now may not work.