Accessibility links
Having a Ball with Juan Garcia Esquivel Have a cocktail. Why? Because Juan Garcia Esquivel is back... after a fashion. True, he died in 2002. But the man who practically invented 1950s lounge music — then led a resurgence in the 1990s — is being rediscovered on a CD called The Sights and Sounds of Esquivel!.

Listen
Having a Ball with Juan Garcia Esquivel

Have a cocktail. Why? Because Juan Garcia Esquivel is back... after a fashion. True, he died in 2002. But the man who practically invented 1950s lounge music — then led a resurgence in the 1990s — is being rediscovered on a CD called The Sights and Sounds of Esquivel!. 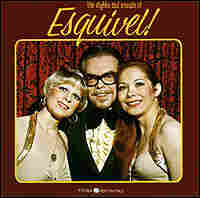 For many fans, Juan Garcia Esquivel is the very face of lounge music. hide caption

Another newly discovered work from a different kind of genius has surfaced.

ELLIOTT: OK, everybody, it's cocktail hour.

ELLIOTT: This is the man who practically invented 1950s lounge music and led its resurgence in the '90s.

Mr. ESQUIVEL: And by the way, my name is Esquivel.

ELLIOTT: Juan Garcia Esquivel is best known for what's been called `space-age bachelor pad' music. But you've probably also heard his compositions in the themes for a host of '70s TV shows like "Kojak," "The Munsters," "Charlie's Angels" and "The Six Million Dollar Man." Esquivel experienced a comeback in the '90s and his music was featured in movies like "The Big Lebowski" and even at Disneyland on the Space Mountain ride. The Mexican songwriter and composer died in 2002, but a new release harkens back to his days as a lounge performer. It's called "The Sights and Sounds of Esquivel!", a recording that was made in 1975. Back then, Yvonne de Bourbon was part of his act. Not only did she perform with Esquivel but was married to him for five years in the '70s. Yvonne de Bourbon-Rodriguez joins us now from Palm Springs.

Hello. Thanks for being with us.

Ms. YVONNE DE BOURBON-RODRIGUEZ: Thank you for inviting me, Debbie.

ELLIOTT: Now where has this tape been all these years?

Ms. DE BOURBON-RODRIGUEZ: Actually I had it. I had a copy of the original in my possession in storage for years and years and years, and when there was the resurgence of Juan's music, I came across the tape and this is the culmination of it.

ELLIOTT: Does it bring you back?

Ms. DE BOURBON-RODRIGUEZ: Ooh, yes, it brings back a lot of memories.

Ms. DE BOURBON-RODRIGUEZ: He was electric on stage and the cues for the girls or the musicians coming in to the arrangement would be also enhanced by light cues that would come off of his fingertips in essence. He would snap is fingers and point to a musician or the singers and lights would go on.

ELLIOTT: One of the striking things about Esquivel's arrangements, aside from his innovative use of stereo sound effects, was that the lyrics to a lot of his songs weren't really lyrics at all. They weren't necessarily words but were almost sounds as well.

ELLIOTT: When he was listening to music, did he just hear things like `oohs' and `zooms' and `aahs'?

Ms. DE BOURBON-RODRIGUEZ: Actually what he was trying to do with the voices was to make them sound like another instrument.

Ms. DE BOURBON-RODRIGUEZ: So sometimes the sounds would be similar to the percussive sounds of a trumpet or violins, depending on whether azoo-zoo or pow-pow.

ELLIOTT: Now just for a moment here, would you take us back to the period when you were married to Esquivel. I think that was 1973?

ELLIOTT: Would you describe for us your living room? I'm sort of picturing this orange velvet couch or something. What was it like?

Ms. DE BOURBON-RODRIGUEZ: It's very strange. You go to Las Vegas and some of the older motels or hotels still carry some of the types of furniture that we had in our home. It's very ornate wood. He loved dark woods. So he was always collecting art and it was very colorful for the times, though I can't say he has an orange sofa.

ELLIOTT: How did he view what he did? I read at one point that van Gogh was a big influence on him.

Ms. DE BOURBON-RODRIGUEZ: I think he viewed his music as very colorful and he loved colors. I remember one Christmas I gave him a robe and it had all these Aztec colors in it and he loved that robe. As a matter of fact, we were in Puerto Rico one season and we had to communicate with our road manager who was in a condominium a few blocks away with no telephone. And he used to take that robe and shake it on the balcony, wave it back and forth to try and catch the attention of his road manager so that he would call us. But he loved colors. He just had to have colors in his music. He loved humor. So he would put humor into his music. And I think that's how he saw life.

Mr. ESQUIVEL: This number, it's an original. It's a composition that I wrote thinking on a Spanish motif. The title is "La Mantilla." La mantilla, it's a garment that the ladies, the senoritas, wear in Spain, in Mexico, in Portugal when they go to flirt.

ELLIOTT: I have one final question, and though we have this image of him as the quintessential bachelor--and he was married several times--was that really the person that he was?

Ms. DE BOURBON-RODRIGUEZ: Which? The bachelor or the married man?

Ms. DE BOURBON-RODRIGUEZ: He was a playboy. Women in Mexico when he would perform would take their dresses off and throw them on the stage.

ELLIOTT: Not just their underwear like they used to do to Tom Jones here in this country...

ELLIOTT: ...but their entire dress now.

ELLIOTT: Was it hard to be his wife when women were just literally throwing themselves at him like that?

Ms. DE BOURBON-RODRIGUEZ: No. I think that by the time Juan and I married, he had calmed down a lot or maybe it wasn't that. Maybe he was realizing at that particular time in this country there was not the funds available to produce the show in any great part. And he saw sort of a fading of the kind of music that he could play in nightclubs. He loved performing. It was, for him, the very best thing he could do. And when the economy of the country was changing so drastically and there was no way for him to move the show around, like he had been, it was a very disappointing time for him. And I think he withdrew within himself a lot during that time. So he wasn't even leaving the house. He became very depressed.

ELLIOTT: Did his resurgence in the '90s knock him out of that?

Ms. DE BOURBON-RODRIGUEZ: Oh, yes. He was tickled pink when he saw all of the, in essence, applause that he was suddenly getting again and it really perked up his life till the very end.

ELLIOTT: Yvonne de Bourbon-Rodriguez, a former wife and performer with Esquivel. The new album is called "The Sights and Sounds of Esquivel!"

Thank you so much for sharing with us.

Ms. DE BOURBON-RODRIGUEZ: Thank you, Debbie, for asking me for the interview.

ELLIOTT: Grab a martini, a marguerite or a Shirley Temple and head for our Web site. You'll find three swinging tunes from "Sights and Sounds" there, npr.org.