Accessibility links
Mississippi Students Go to Tent School for Education Schools in the two of the hardest hit communities along the Gulf Coast, Waveland and Bay St. Louis, Miss., won't be able to reopen until sometime in November. Until then, students in grades Kindergarten through 5 can go to tent school.

Schools in the two of the hardest hit communities along the Gulf Coast, Waveland and Bay St. Louis, Miss., won't be able to reopen until sometime in November. Until then, students in grades Kindergarten through 5 can go to tent school. 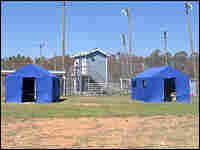 These tents are being used as temporary classrooms for children from Waveland and Bay St. Louis, Mississippi. David Schaper, NPR hide caption

Two months after Hurricane Katrina devastated the Mississippi Gulf Coast, schools in the communities of Bay St. Louis and Waveland still have not been able to reopen. The two towns are considered ground zero, the area hardest hit by Katrina's winds and 28-foot storm surge. Two of the local schools were destroyed and others suffered significant damage. When classes finally do resume, many will be held in portable classrooms. In the meantime, dozens of children in the two towns are attending classes and are seeing friends again in tent schools. NPR's David Schaper reports.

Ten-year-old Britney Brown(ph) says being out of class for the last two months since Katrina destroyed her Bay St. Louis school really hasn't been too bad.

BRITNEY BROWN: I don't miss school at all because I'm really not a school person.

SCHAPER: But her mother, Nicole Brown, takes a different view and says this is what she needs.

Ms. NICOLE BROWN: A break. No, I'm ready for school to start. I'm tired. You know, they're bored and they need something normal to do for a change.

SCHAPER: Teacher Elke Michalak and a group of fourth- and fifth-graders discuss characters from the book "The Phantom Tollbooth," pretty standard literature for the age and with it she covers some pretty standard concepts.

Ms. MICHALAK: What is that called when we have...

Ms. MICHALAK: All right. So we have homophones. We have weather and whether. Can we think of other words that are homophones?

SCHAPER: Michalak and her students are sitting on the ground inside a blue nine-by-16 canvas tent, one of about a half a dozen or so identical tents set up on a baseball diamond at the Bay St. Louis Sports Complex. This is tent school. Michalak who taught fourth and fifth grades in the district's now destroyed alternative school is volunteering her time here while on paid administrative leave. And while it may not be much, Michalak says tent school is filling an enormous void for the children of the devastated towns.

Ms. MICHALAK: And it's better than being at home doing nothing and observing all the depression that surrounds them, you know? So they get to see all their other students that they go to school with and they talk. And I think it's a stress reliever for them.

SCHAPER: Becky Ladner, the principal of Waveland Elementary School, adds that the tent school is helping children who may have felt isolated after Hurricane Katrina turned their lives upside-down.

SCHAPER: Funded by the Virginia-based Louden Foundation, the tent school is in session from 10 to 2 each weekday for kids in kindergarten through the fifth grade, and older kids from the middle and high schools help out as aides, earning volunteer service hours that they'll need to graduate. The students move from tent to tent for math, reading, writing, arts and crafts, and to a bus in the parking lot for computers. The Pearson Education Foundation donated a big RV with a dozen computers on board and a satellite connection to the Internet. Students there can run through curriculum-based games and programs. Everyone sticks to the basics and tries to keep it fun, but the tent school's project director, Albert Beltran, says they also know that students have already lost so much instructional time that it will be difficult to make it up.

Mr. ALBERT BELTRAN: I'm actually trying to work with some of the teachers here, trying to get their input, how can we move this more toward Mississippi state standards, so that way the kids, when they go back to school, they don't lose too much.

SCHAPER: Still, students earn no credit in the tent school and attendance is voluntary and pretty informal. Many of the kids come late, leave early and only a few can make it every day. But even fourth-grader Britney Brown, who didn't like regular school, has better things to say about tent school.

BROWN: I had a lot of fun doing computer and reading and math.

SCHAPER: After starting out the first week with about 30 students a day, the tent school, now in its third week, draws about 80 kids a day. And tent school will continue until the damaged school buildings and new portable classrooms are ready to open in Bay St. Louis and Waveland, which school officials hope will be November 7th.