Accessibility links
The Masked Men of Mexican Movies On this Halloween eve, we put the spotlight on Mexico's obsession with wrestlers in masks. Bobb Cotter, author of The Mexican Masked Wrestler and Monster Filmography, takes us into the world of characters like El Santo and Blue Demon, and their silverscreen battles with fantastical monsters and villains.

On this Halloween eve, we put the spotlight on Mexico's obsession with wrestlers in masks. Bobb Cotter, author of The Mexican Masked Wrestler and Monster Filmography, takes us into the world of characters like El Santo and Blue Demon, and their silverscreen battles with fantastical monsters and villains. 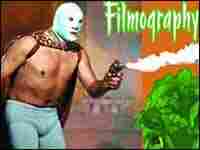 Detail from the cover of The Mexican Masked Wrestler and Monster Filmography. hide caption

Oh, no! Earth is being attacked by martians in metallic tights! What can we do? Call in the friendly neighborhood masked wrestler.

(Soundbite of cheering and applause)

ELLIOTT: In hundreds of movies from the 1950s, '60s and '70s, Mexico's professional wrestlers saved the world. Vampire women, Aztec mummies and diabolical brains from outer space were no match for El Santo and his colleagues Blue Demon and Mil Mascaras. Bobb Cotter wrote "The Mexican Masked Wrestler and Monster Filmography," and he joins us now.

ELLIOTT: Now from reading your book, I get the sense that these guys were very popular and that they would be out and about and were always in character, that they never took their masks off. So you might be, like, walking down the grocery store aisle and see El Santo or Blue Demon right there, mask and all.

Mr. COTTER: Exactly, and that was their public persona. And it's really as if superheroes were alive. It's like if Batman was a real human being and you could go out anywhere, and they never, ever revealed their true face to the public. And as a matter of fact, on this crypt in Mexico City, the face on the nameplate is the mask of El Santo and not his real face.

ELLIOTT: Tell us a little bit about Santo. He wasn't the only masked movie star, but he was probably the most famous in Mexico. And in your book, you compare him to John Wayne?

Mr. COTTER: Sure. He was the John Wayne of Mexican cinema. I mean, he was one of the top stars for decades. And when he died, the entire country was in mourning. I mean, people lined the streets for his funeral.

ELLIOTT: Very few of these movies are available north of the border, but we managed to get our hands on "Santo vs. the Martian Invasion" this week. It kind of reminded me of the old "Plan 9 from Outer Space" with a bit of a higher budget. I didn't see any flying paper-plate saucers here.

Mr. COTTER: Yeah. Yeah, that's a classic. Apparently Mars is some sort of giant health club planet, and all the men are built like pro wrestlers and all the women are very gorgeous and they wear skimpy outfits. And it's really funny, that's another thing about the Mexican monster wrestler movies--is that whether a monster is centuries old or whether he is even not of this Earth, they all manage to know all of the latest wrestling moves.

ELLIOTT: Not only do they, like, have these wrestling fights, but in this movie there was actually a wrestling match in a ring in the movie.

ELLIOTT: And occasionally they would even break out in song.

Mr. COTTER: Oh, yeah, yeah, yeah, sure. The--you could have guys in medieval costumes playing mandolins, or you could have Jimmy Santi(ph) singing on the beach with El Santo and girls in bikinis doing the hippy hippy shake behind them, and things that would just boggle your mind.

Mr. COTTER: Well, it probably has to be a tie between "Santo vs. the Vampire Women" and "The Wrestling Women vs. the Aztec Mummy."

Mr. COTTER: "Santo vs. the Vampire Women" has probably the all-time classic scene where they're in the ring, and Santo's fighting just a difficult match against his opponent. And he's lying in the corner and then he's telling his trainer--he says, `I think he's using karate on me' and `One blow, he could kill me.' And he goes back and he mixes it up again and (gasps) he almost gets unmasked. And it's a very tense moment. And then Santo gains the upper hand, and he pulls the mask off of his opponent. And underneath the wrestling mask is a werewolf. And then when Santo and the local police all jump in and pile on top of the werewolf, he changes into a bat and flies away. That's it.

Mr. COTTER: They're movie comic books and, no, they're not (with stoic tone) serious type of--dramatic type of Oscar-worthy films. They're just a lot of, you know, something for everybody and they contained a little bit of everything, really: you know, guys in masks and beautiful women in skimpy costumes and evil villains and sports cars, lounge lizard numbers, midgets. I mean, just everything. They're what movies are all about.

Mr. COTTER: Oh, thank you very much. Thank you.