Accessibility links
'March of the Penguins' a Box Office Surprise March of the Penguins is -- by far -- the surprise hit movie of the year. The film about the Emperor Penguins' extraordinary breeding cycle is now the second-highest-grossing documentary ever, just behind Fahrenheit 9/11. It's also the highest grossing French film ever released in the United States.

Listen
'March of the Penguins' a Box Office Surprise

March of the Penguins is — by far — the surprise hit movie of the year. The film about the Emperor Penguins' extraordinary breeding cycle is now the second-highest-grossing documentary ever, just behind Fahrenheit 9/11. It's also the highest grossing French film ever released in the United States. 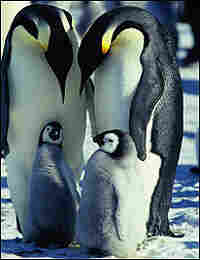 The surprise hit movie of this year remains "March of the Penguins." The film about the emperor penguins' extraordinary breeding cycle is the second highest grossing documentary just behind "Fahrenheit 9/11." It's also the highest grossing French film ever released in the United States, and its popularity has amazed even the people who made it. NPR's Elizabeth Blair reports.

Seventy-seven million dollars at the box office. That's more than critically acclaimed French films like last year's "A Very Long Engagement" or another nature documentary, the French "Winged Migration," whose earnings were dwarfed by "March of the Penguins." So what is it about this nature documentary that managed to break through to such a large audience? Nobody expected it, including one of the guys who bought it for the US market. Mark Gill, president of Warner Independent Pictures, saw the original French version at the Sundance Film Festival last January.

Mr. MARK GILL (Warner Independent Pictures): At the time, Premiere magazine actually made fun of me and said, `What was Mark Gill thinking when he paid a million dollars for a French documentary about a bunch of penguins?' But now that it's earned $77 million, I actually look not like an idiot, but a genius.

BLAIR: In case you missed it, "March of the Penguins" tells the story of the emperor penguins' long haul across the barren Antarctic ice to find a mate and reproduce.

Mr. MORGAN FREEMAN: Each year, at around the same time, it will leave the comfort of his ocean home and embark on a remarkable journey. It will travel a great distance, and though he is a bird, he won't fly. Though he lives in the sea, he won't swim. Mostly, he will walk, but he won't walk alone.

BLAIR: "March of the Penguins" was directed by Luc Jacquet, a biologist turned filmmaker. Jacquet and a small team spent 13 months in Antarctica filming the birds. The documentary was financed by a small French company called Bonne Pioche. It was their first feature length film and nearly their last. The conditions for filming were challenging, to put it mildly. Two crew members almost died in a blizzard. Extreme weather made it impossible for them to view any of the footage they were shooting during their trip. With nothing to show, Bonne Pioche couldn't find a co-producer or a distributor. The company nearly went bankrupt investing in the film. Luc Jacquet.

Mr. LUC JACQUET (Director, "March of the Penguins"): One years ago, this film was biologically dead, you know, medically dead. Everything was bankrupt. We were working for nothing, because it was quite impossible to prove that this film would be a good film.

BLAIR: Luc Jacquet's French version of the film is quite different from the one shown in the US. The story and the breathtaking photography are the same, but for the narration, Jacquet used three actors to portray a penguin family: the male, the female and their chick.

(Soundbite of "March of the Penguins," spoken in French)

BLAIR: Jacquet admits he took some artistic liberties in the way he told the story. He says that's because he fell in love with the emperor penguins after spending so much time with them.

Mr. JACQUET: The point of view is inside the penguin world, if I can say that, but for me, it's a way to be closer to them, you know, to be with them, to live with them, and not to have distance.

BLAIR: To create this intimacy, Jacquet used what to many is a questionable technique, like these breathless ruminations by the penguins.

(Soundbite of "March of the Penguins," spoken in French)

BLAIR: Mark Gill says this version didn't go over too well with American film industry executives when they saw it Sundance.

BLAIR: But Gill says he and his partners at National Geographic thought a modified version of the film might have some appeal to American audiences.

Mr. GILL: The images are like you've never seen before. They did spend 13 months in a place that nobody's ever done it before, and the combination of that, plus the emotional appeal of this story of one family told by Morgan Freeman, who we also hired, by the way, to do this--it's always good when you get the voice of God to narrate your movie--really resonated with people and they were just moved by it.

BLAIR: The penguins do have an uncanny way of behaving that seems recognizably to humans. At one point, a female penguin appears to grieve over her dead chick.

BLAIR: But some critics say even in this more straightforward telling of the story, "March of the Penguins" indulges too much in projecting human emotions onto the penguins. Tom Rankin believes that's exactly why it's been so successful. Rankin is head of the Center for Documentary Studies at Duke University. He says he prefers more balanced documentaries and that "March of the Penguins" is like "Fahrenheit 9/11," an entertaining documentary with a specific point of view.

Mr. TOM RANKIN (Duke University): This is a very romanticized melodrama that, because of the narration, you know, presented as a, quote, "love story," which is a human deal.

BLAIR: "March of the Penguins" has reached a very broad audience. It's that rare film that appeals to both adults and kids. It's also become something of a phenomenon among some Christian conservatives who believe the film promotes traditional family values, but the facts of the film don't so neatly support human notions of morality.

Mr. FREEMAN: Emperor penguins are monogamous, sort of. They mate with only one partner for a year, which means every new season, all bets are off.

BLAIR: "March of the Penguins" has been in theaters now for 18 weeks, an unusually long run for a nature documentary. Elizabeth Blair, NPR News.

INSKEEP: You can find a gallery of photos from "March of the Penguins" at NPR News.