Accessibility links
For Niger, Improved Health Care May Cut Famine During famine, children technically don't starve to death, they die from disease. In Niger, the organizers behind an educational campaign on disease prevention -- aimed at mothers -- hopes it will lessen the toll of hunger crises. 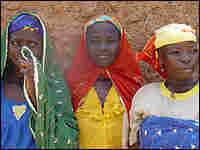 Girls as young as 14 and 15 are already mothers in rural Niger, and their babies are often malnourished. A government educational program is helping them to figure out what to feed their children during hunger crises to help keep them healthy and strong. Ofeibea Quist-Arcton, NPR hide caption

In sub-Saharan Africa, the United Nations World Food Program reports that it is struggling to feed a record 43 million people -- twice the number of just 10 years ago. Poverty, conflict, AIDS, drought, corrupt and weak governments all contribute.

Food shortages create widespread malnutrition, allowing diseases to run rampant. Yet even in the most impoverished nations, doctors are keeping people alive by stopping the lethal diseases caused by hunger.

Maradi, Niger's second city in the south, was hard hit by this year's devastating hunger crisis. Haunting images of stick-thin malnourished children were beamed all over the world. And news organizations, including NPR, reported that many babies were dying of starvation.

"These children don't die of hunger and malnutrition as such," he says. "But when a child is malnourished, the immune system is weakened, making children more vulnerable. That's why we call malnutrition the link to all other infections. It's an explosive catalyst.”

In the villages of the arid Sahara, he adds, "children are exposed to everything and catch all sorts of opportunistic diseases."

At a tented intensive care unit in Maradi, almost all the severely malnourished babies seem to have a cough. The center is run by the medical relief agency, Doctors Without Borders, which has treated thousands of hungry babies in Niger since June. Dr. Chantal Umutoni, who works with the group, says as the weather has turned colder and windier, she's seen an increase in the number starving infants with chest and other infections.

"Right now we [have] a peak of malaria.... When the children reach our center, either it is too late, they are too sick or, because of the state of malnutrition, they are so weak, they die," she says. "The immune system of severely malnourished children is too low and they can't cope with disease."

At a local primary school in Maradi, children learn about the causes of the most common diseases -- like malaria -- that often accompany malnutrition.

"What causes malaria?" the teacher asks.

"Mosquitoes, of course," the children all agree, adding enthusiastically that they should sleep under treated mosquito nets to avoid infection. But many acknowledge that they don't.

In Niger, one in four children under the age of five is reported to die from poverty and hunger-related causes. To trim those numbers, the government has launched awareness campaigns on good nutrition and disease prevention. They are primarily aimed at women like the mothers of malnourished children, hospitalized in Maradi, who gather at sunset to break their holy Ramadan fasts with drinks of a syrupy orange beverage.

"We've trained what we call 'mother educators,' up to 10 per village where possible, to teach women -- and men -- how best to feed their children," says Dr. Garba, the medical officer. "Most importantly, not to wait to take children to the clinic as soon as they fall ill."

Despite these efforts, poverty remains a key factor in access to health care in Niger. In Madarounfa village and nearby Dan Toudou, for instance, women are workhorses. They spend the day in the fields farming, then -- when the harvest is good -- pounding millet to prepare the meals to feed the family. But often these women don't have ready cash for emergencies.

It's difficult enough to raise the dollar or so needed for a consultation at the clinic for your child, says Sahara Garba, a 20-year-old mother of three. She says that once she's trekked all the way from the village, she simply doesn't have the extra 20 cents to pay for a syringe for a blood test if it's needed. And that's the reason, she says, that some mothers in Niger just don't bring their children to the hospital, even when they're hungry and sick.

"The first solution is really to improve access to health care," says Chantal Umutoni, the pediatrician from Doctors Without Borders. "Politicians must put in enough means -- in terms of access to food, improving agriculture -- and access to the food on the market and free health care."

If people get access to health care, she says, mothers will bring the children to the health centers as soon as they are sick. That will prevent many deaths.

There are small-scale, income-generating initiatives to help women in Niger become more economically independent, says Arsene Azandossessi, the coordinator in Maradi for the U.N. Children's Agency. One such UNICEF project benefits women -- and malnourished children -- in Garin Goulbi village, outside Maradi.

"With the community, UNICEF has set up a goat's milk project in many villages like Garin Goulbi," explains Arsene Azandossessi, head of the U.N. Children's Fund in Maradi. "We buy the first two goats for needy mothers and then we leave them to rear the goats and to feed the milk to malnourished children."

"The goats mate and multiply," he says. "And the women, in turn, give goats to other women who can feed other malnourished children and so on. It's a simple system that works."

Health experts in Niger acknowledge that it will take much more to ensure that malnutrition -- and associated common diseases -- are deemed a menace of the past.

But Garba is hopeful. "It takes time for people to change their behavior and habits, when it's such a deep part of their culture," he says. "But I believe that if we continue along the course we have started that, with good rains, God willing, in the next five years, malnutrition will seem like just a bad dream from Niger's past."

Meanwhile, despite a good October harvest, hundreds of emaciated, severely malnourished infants are still being treated for a variety of infections in Maradi and elsewhere in Niger.

Doctors Without Borders Report on Niger