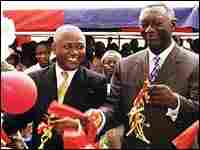 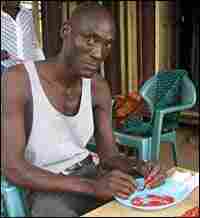 Pro-Link member Daniel Wuletey. He's pictured making AIDS ribbons which are sold to raise funds for the HIV/AIDS support group. AIDS made Wuletey too weak to work. But new AIDS drugs have brought him back from the brink. Richard Harris, NPR hide caption 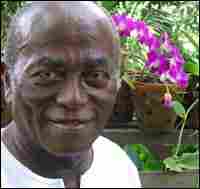 Dr. Fred Sai is an adviser to Ghana's president on reproductive health issues. He says the Global Fund can play a critical role in Ghana, not just by providing AIDS funding, but by causing broader ripple effects on society. Alison MacAdam, NPR hide caption

Four years ago, wealthy nations established the Global Fund to Fight AIDS, Tuberculosis and Malaria to combat some of the world's most devastating diseases.

The fund was envisioned as a necessary and even morally required step to provide life-saving drugs to people who simply can't afford them.

It turns out this humanitarian response may actually have some unexpected benefits.

When Ghana applied to the Global Fund for its first grant for AIDS drugs, nobody expected that the money would also help stimulate new business in the country. But it has.

In the sprawling capital of Accra, what appears to be a drug store in an industrial neighborhood is actually a brand new, three-story pharmaceutical factory.

"We started construction on Aug. 6, 2004, and we spent about nine months to put it up," says Yaw Adu Gyamfi, who runs the new enterprise, DanAdams Pharmaceuticals.

Gyamfi realized that there's a growing market for AIDS drugs, and with the Global Fund, a pile of money with which to buy them. He found a Chinese drug company to bankroll and build the factory, which sits behind his pharmacy. The president of Ghana personally inaugurated the building in June.

Inside, there’s a long hallway lined with doors. One opens to a receiving room for the active ingredients and additives -- all shipped here from China. Gleaming equipment is everywhere, labeled in Chinese and tended by Chinese and African technicians. Round white tablets spill from a production line.

Today the line is producing antibiotics. But Gyamfi's ambition is much greater.

"We looked into the pharmaceutical industry in Ghana," he says, "and we saw basically people were just making vitamins and all other things. But the two main endemic illnesses in Ghana were not being tackled, and that is the AIDS epidemic and malaria. So we said, 'OK, we will look into those two main areas, and produce drugs to combat these diseases'."

DanAdams' AIDS drugs are not yet for sale. Eventually, however, the company plans to produce generic versions of seven drugs that form the backbone of AIDS treatment. The company has plenty of room to expand and ambitions to provide these AIDS drugs to countries throughout Africa.

"Apart from just business terms of making profit, what is our social responsibility to meet the needs of our people?" he asks. One answer, he says, is to provide Africa with adequate supplies of AIDS and malaria drugs, "and I am very confident we will arrive there."

There's no question that there's a compelling need for these drugs in Ghana. The disease has not overrun the country -- about 3 percent of Ghana's population is infected -- and health officials are determined to keep the disease from spreading.

One effort to limit AIDS can be found just a few miles down the road from the factory, in a rutted dirt alley that dead-ends at a house surrounded by a white wall. The sign calls this place Pro-Link, but everyone around here just calls it AIDS House. Bernice Heloo is simply Mommie to the people who gather here for social support.

On a recent day, Heloo welcomed them as they trickled in. "By 10 o’clock we will have a full house," she says.

One woman sets up a Coca-Cola stand to sell to anyone who wanders down the lane. Some days the women make batik cloth. Today they are stringing tiny beads, making lapel ribbons. The yellow ones memorialize orphans. Daniel Wuletey is making a red one, for AIDS. He was a tailor until AIDS made him too weak to work. Then new AIDS drugs brought him back from the brink.

"Before, I can't eat well," he recalls. "Then I can't walk from here to the gate. I am totally weak. Since I have started [the drugs] three months [ago], everything changed. I can eat again."

He pays about $6 a month for the medicine, which the Ghanaian government purchases and distributes using Global Fund money. But even that price is a stretch in a country where many people earn less than a dollar a day. For instance, Daniel says that, a year ago, his wife ran out of money to keep buying the antiretroviral drugs (ARVs).

"She lost her mother… the family was disturbing her to buy a coffin… to bury her mother and so forth. And she don't have money. So she stopped taking the ARVs," he says. "Now, she's been getting weak."

Ghana has put about 3,000 people on these life-saving medications. The challenge in the next few years will be to provide those drugs, and associated medical care, to another 25,000 or 30,000 people who would otherwise die of AIDS. As it is, the demand for these drugs is straining the system.

An hour outside of Accra, for instance, is the pharmacy at St. Martin's Hospital. It is one of just five in the country that's currently dispensing AIDS drugs. On this morning, the benches in an open-air waiting room are filled with dozens of people dressed in colorful batiks. A large crucifix adorns the wall just outside the exam room door.

Henry Nagai, of Family Health International, sees patients one after another. He's the lone doctor at this AIDS clinic.

Treating AIDS is not simply a matter of passing out drugs. Everyone needs individual medical attention. And Nagai says treatment does more than help individuals -- it's helping to stem the epidemic.

"The fact that people know that there is treatment, that antiretroviral drugs are available, has made people be more or less open about their condition," he says.

Now that drugs are available, people step up to get tested for HIV. And people who are infected can then take extra care not to spread the virus. So far, the incidence of HIV in Ghana is holding steady. The strategy seems to be working.

But the program hasn't been entirely trouble free. At the moment, Nagai has run out of one AIDS drug. Another is in short supply.

Nagai says bigger challenges loom, as Ghana attempts to scale up its program to dozens of sites around the country. The country simply needs more medical personnel who can manage patients on these drugs.

"The workload is becoming overwhelming," he says. "I come in the morning, for example, and I have to see almost 100 clients before I close. Looking at the numbers that are being recorded every day, I'm afraid the human resource problem will worsen with time."

Even so, Dr. Nagai knows many more people would benefit from these drugs. So he is actively promoting them even as his workload grows. A local musical group called the Queen Mothers Association even composed a song about the benefits of AIDS drugs. It's the theme for a radio show about the disease.

Such radio shows, billboards and news reports build demand for AIDS drugs, so Ghana now needs to expand its program to the entire country. That means strengthening the medical infrastructure everywhere.

Professor Fred Sai is a senior statesmen of public health in Africa. During an interview at his home in Accra, Sai said that the Global Fund can play a critical role in Ghana, not just by providing AIDS funding, but by causing broader ripple effects in society.

The biggest ripple, he says, "would be to strengthen the health services generally. If you free the health service economically, it can develop itself and provide better service all around to the people. That is a major, major input into health care development in this country."

Sai sees the appeal in locally produced drugs for local people. In the long run, stimulating local economic activity is what Ghana needs to bring the country out of poverty, he says.

The Global Fund was not designed to do this, but it may end up playing a role, by creating a vast new market for anti-AIDS drugs.

"It would be good, but they must assure quality control," Sai says. "So the products exiting their factories are products that can be depended upon."

Bad drugs could be worse than no drug at all, he cautions. For instance, they could help the AIDS virus mutate and become resistant to treatment.

At the DanAdams drug company, Chief Executive Officer Yaw Adu Gyamfi is still working to prove that his drugs are just as good as anybody else's. They have to pass a strict test. Ghana cannot use Global Fund monies to purchase Gyamfi's drugs unless they have been reviewed and pre-qualified by the World Health Organization. That is a long and demanding process.

"We have written a letter of interest that we want to be inspected for pre-qualification. So once all the checklist is done, I think we will be ready," Gyamfi says.

So far, just about the only AIDS drugs that have passed that test come from the United States, Europe and big drug companies in India. It's a tough club to join.

Much of the Global Fund money used to buy AIDS medicines simply flows back into the rich donor countries, into the coffers of GlaxoSmithKline, Bristol Myers Squibb and other drug companies. Gyamfi would like to change that, with cheaper drugs that also leave some of the profits in Africa.

"Americans made what America is," he says. "Ghanaians have to make what Ghana [is] to be. Africans have to make what they want Africa to be. So we need to look into the future -- look at the pharmaceutical industry. We see there's a need and we want to fulfill that need. Africa is a goldmine. You just need to know what you want to do."

Gyamfi's dreams still depend, though, on money from the Global Fund. Ghana has just received the promise of another $97 million to expand its AIDS program. But that money won't flow until the fund has the cash -- and as of now, the Global Fund is underfunded by $300 million.

The Global Fund to Fight AIDS, Tuberculosis and Malaria