Accessibility links
Nation Bids Farewell to Civil Rights Icon Rosa Parks Politicians, celebrities and thousands of mourners honored civil rights pioneer Rosa Parks Monday at a memorial service in Washington, D.C. Her remains lay in honor in the rotunda of the U.S. Capitol over the weekend, a first for a woman.

Politicians, celebrities and thousands of mourners honored civil rights pioneer Rosa Parks Monday at a memorial service in Washington, D.C. Her remains lay in honor in the rotunda of the U.S. Capitol over the weekend, a first for a woman. 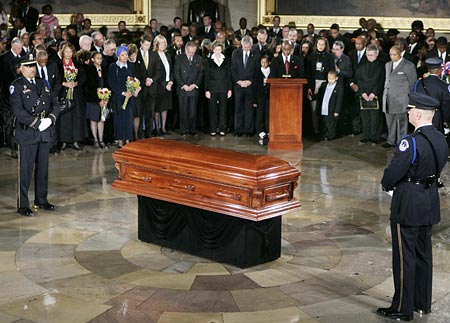 Unidentified Chorus: (Singing) Lift every voice and sing till earth and heaven ring...

Americans continued to pay tribute today to the woman known as the mother of the civil rights movement. Rosa Parks was remembered at a memorial service in Washington, DC, after becoming the first woman ever to lie in honor in the Rotunda of the US Capitol. Some 30,000 people passed by her casket last night and this morning to pay their respects. This afternoon Parks was remembered by African-American leaders and others who spoke passionately and with great emotion about a woman they consider a national hero. They honored Parks for helping to inspire the civil rights movement by famously refusing to give up her seat to a white man on a Montgomery, Alabama, bus in 1955. Washington, DC, congressional delegate Eleanor Holmes Norton called that act the functional equivalent of a non-violent shot heard round the world.

Representative ELEANOR HOLMES NORTON: In great humility Rosa Parks' gift was not the message, `I am doing this to free you.' Her message was far more direct, `Free yourselves.'

Ms. JOHNNY CARR: Rosa and I had worked together at the NAACP for many years. We knew the things that we were suffering as citizens of these United States of America. And I feel that in her heart, as in my heart, we had the idea that if it was any way possible to do anything to help it we would have done it, to change the thing that we were suffering: white and colored fountains, white and colored entrances--everything you could see was--it was segregated. So so much has happened in our lives and things had gone on that I feel like on December the 1st, 1955, Rosa Parks said, `Enough is enough.'

BLOCK: That's Johnny Carr, a longtime friend of Rosa Parks, speaking at today's memorial service in Washington. Television icon Oprah Winfrey thanked Parks for being the hero that black people growing up in the '50s and '60s did not otherwise have.

Ms. OPRAH WINFREY: That day that you refused to give up your seat on the bus, you, Sister Rosa, changed the trajectory of my life and the lives of so many other people in the world. I would not be standing here today nor standing where I stand every day had she not chosen to sit down.

BLOCK: For more than 20 years, Rosa Parks worked in the office of Congressman John Conyers in Detroit, and he spoke as well.

Representative JOHN CONYERS (Democrat, Michigan): We will all aspire to be strong and humble voices for justice, for even in death she has given her--the final admonition. If everybody is equal we can win. Thank you so very much.