Accessibility links
'Buckyball' Nobel Laureate Richard Smalley Dies Scientist Richard Smalley helped discover a new form of carbon, known as "buckyballs," for which he shared a Nobel Prize in Chemistry in 1996. His research helped launch the field of nanotechnology. Smalley died last week at age 62, after a six-year battle with cancer. 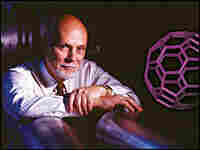 Richard Smalley shared the 1996 Nobel Prize in Chemistry for his work on 'buckyballs' -- a new form of carbon. His work paved the way for nanotechnology research. Smalley died Oct. 28 at age 62. Rice University hide caption

Richard Smalley, a chemist at Houston's Rice University who shared a Nobel Prize for the discovery of buckyballs, died last week at age 62.

Buckyballs are made of 60 carbon atoms. The atoms are arranged in a kind of sphere, making the buckyballs look just like soccer balls. "It's perfectly round and hollow on the inside, except this soccer ball is only one-billionth of a meter in diameter," Smalley told NPR in 1996.

He and his colleagues named buckyballs after the geodesic domes designed by the architect Buckminster Fuller.

Smalley and several colleagues accidentally discovered buckyballs in 1985, while doing experiments in his lab in Houston. They'd originally set out to investigate the chemistry of carbon-rich giant stars. After they vaporized carbon with a laser and let it condense in a chamber full of helium gas, they unexpectedly saw clusters of 60 carbon atoms. The scientists quickly realized that the carbon atoms might form a stable sphere.

The buckyballs were a previously unknown form of pure carbon, like diamonds and graphite. In 1996, Smalley shared the Nobel Prize in Chemistry with his Rice University colleague Robert Curl and the British chemist Harold Kroto; the prize committee noted that "for chemists, the proposed structure was uniquely beautiful and satisfying."

The discovery also ushered in a new excitement for nanotechnology, which aims to use single atoms to build tiny machines and devices. Scientists looked at buckyballs and realized that it might be possible to make other interesting structures using something as simple as a carbon atom. "It turned out that the buckyball, the soccer ball, was something of a Rosetta stone of an infinite new class of molecules," Smalley told NPR in an interview in 2000.

One of those new molecules was the carbon nanotube, which is a buckyball stretched out into a cylinder. They're incredibly strong and have interesting electrical properties. Smalley believed they would revolutionize everything from computers to medical devices. That's still a dream for the future, but dozens of labs now work on nanotubes and other kinds of nanotechnology.

In part, that's because Smalley helped convince funding agencies to pour billions of dollars into this field. "Rick was unusually effective at explaining nanotechnology to the public and the policymakers. He was powerful that way. He was very influential in Congress," says Neal Lane, who was President Clinton's science adviser and now works at Rice University.

Smalley was diagnosed with cancer in 1999. "He was actually working until a few days before he died," says Curl. "He was a tremendously energetic, brilliant person."