Accessibility links
Samuel Alito: Another Nominee, Another Fight The nomination of Samuel Alito, a proven conservative with a track record of opposing abortion, will help President Bush regain some of the political capital he lost amid the failed Supreme Court nomination of Harriet Miers. But he will almost surely have to spend some of it pushing Alito's nomination through the Senate.

Samuel Alito: Another Nominee, Another Fight

Samuel Alito: Another Nominee, Another Fight 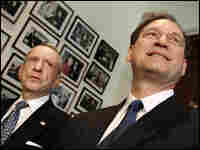 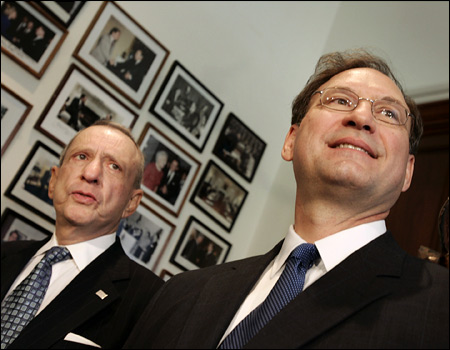 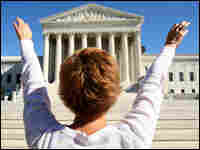 The nomination of Samuel Alito, a proven conservative with a track record of opposing abortion, to the Supreme Court helps President Bush regain some of the political capital he lost amid the failed Supreme Court nomination of Harriet Miers. But the President will almost surely have to spend some of it pushing Alito's nomination through the Senate.

That's because the nomination is anything but a slam dunk with social moderates -- especially moderate Republicans -- many of whom oppose limits on abortion. And it's sure to rile up Democrats worried that the nominee's swing vote could undo decades of legal precedent on everything from abortion to affirmative action.

The battle has already begun for the minds of those in the political middle. It hinges on which side can successfully characterize the 15 years Alito has spent as an appellate court judge in the 3rd District. Liberals will portray him as a constitutional ideologue akin to Justice Antonin Scalia (the origin of his nickname, "Scalito") and unwilling to accept court precedents on controversial issues like abortion. Conservatives will describe him as a thoughtful judicial scholar "who considers the legal merits carefully and applies the law in a principled fashion," as President Bush said when he announced Alito's nomination on Monday.

Liberal groups are promising to wage a massive campaign to defeat the nomination. "This is going to be the most important, most controversial Supreme Court confirmation battle since Robert Bork and Clarence Thomas," said Ralph Neas, chief executive of People for the American Way.

But some conservatives are playing down the likelihood of a showdown. "I don't think we'll see an enormous political battle," said David Frum, a fellow at the American Enterprise Institute, who believes Alito's impressive credentials and judicial track record will win ample support among moderates in the end. Frum compared the Alito nomination to President Clinton's choice of Justice Stephen Breyer. Despite Breyer's opposing views, many conservatives see him as possessing a keen judicial mind that make him an "ornament" to the American legal system.

For their part, conservative legal scholars point to Alito's record in cases such as the Fraternal Order of Police v. City of Newark. In that case, Alito sided with a Muslim police officer who felt his religious freedom was being squelched by a police department requirement that he shave. In a separate decision, Alito backed a decision allowing a student group to advertise beer sales in their newspaper. "Sam Alito came down on the side of the First Amendment," said Pepperdine University law professor Douglas Kmeic, "even though, as a father of a college and a high school student, he would have been perfectly happy having those ads out of the newspaper."

Kmiec said Alito is "not an ideologue" and likened him to retiring Justice Sandra Day O'Connor. Both are "always careful to decide the specific case in front of them," he said.

That, of course, is not the view of Alito's opponents. They are likely to focus first on his long track record of opposing abortion rights, such as a 1991 opinion in which he favored a law requiring women seeking an abortion to notify their spouses. In addition, some of his opponents believe the key to gaining traction in the fight will be to underscore the breadth of Alito's conservatism, including a broad range of his decisions on religious freedom, privacy rights and women's rights issues. "He has an extensive track record of employment decisions to undermine women's rights in the workplace," said Marcia Greenberger, co-president of the National Women's Law Center, which lobbies for women's legal rights on issues including abortion.

She and others have already begun laying out a strategy to thwart Alito's confirmation, in part, via a multi-million-dollar media blitz that will hammer hard on two key points. "The first step is to make sure that the American public knows about Judge Alito's record, said Greenberger. "The second step is to make sure the American public understands that this is for the Sandra Day O'Connor seat."

O'Connor, who has agreed to remain on the court until a new justice has been confirmed, was the swing vote on an often evenly split Supreme Court. Even now, in a pending case involving parental notification of minors seeking abortion, O'Connor's swing vote will likely come before a new nominee is confirmed early next year. So whoever replaces her will have an unusually powerful role in deciding the rule of law.

But if Republicans unite behind this nomination, Democrats have little chance of winning a straight up-or-down vote on the Senate floor, where Republicans hold a 55-to-44 vote majority (with one independent). Both sides are expected to focus their efforts on convincing a smattering of moderate Republicans, who generally favor abortion rights. "These people will likely determine the fate of Alito's nomination," said Michael Gerhardt, a law professor at the University of North Carolina. He expects moderates like Senate Judiciary Committee Chairman Arlen Specter will be "put very much on the hot seat" to vote against Alito's confirmation.

Meanwhile, backed by what is expected to be unflinching support from President Bush's conservative base, the White House has already begun its campaign to portray Alito as a man of "keen intellect, impartiality and temperament" who is "both tough and fair," according to a posting on the White House Web site. Talking points sent to his backers even offer a retort to questions about Alito being a white male. It says questions of race and gender are "irrelevant."

If such a view prevails, Democrats may have no other option than to attempt to block the nomination by staging a filibuster, which requires only 41 votes to prevent an up-or-down confirmation vote. That, in turn, could prompt Republicans to vote for the so-called "nuclear option," doing away with filibusters entirely and prompting a dreaded legislative showdown that could shut down the Senate.

Even before the official announcement of Alito's nomination, Sen. Specter said he was "very worried" about just that scenario playing out over the abortion issue. And by Monday morning, Specter had promised abortion would be "among one of the first items Judge Alito and I will discuss."

Other Republicans are more sanguine about Alito's prospects. "This is a grand slam for conservatives," said Jay Sekulow, chief counsel for the American Center for Law and Justice. "He's going to have opposition, but he will be confirmed without any difficulty."