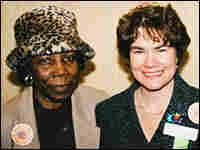 Web Extra: Hear an Extended Version of the Conversation with Dorothy Jenkins and Donna Butts.

What do Jamie Foxx, Oprah Winfrey and Maya Angelou all have in common? All three were raised by their grandparents. And according to the 2000 census, they are not alone.

The number of children living with their grandparents has increased dramatically. Since 1990, the number has climbed 30 percent. These kinship families are especially common in communities of color, where 13 percent of African American kids depend on their grandparents for care.

But when the ties that bind the traditional family break down, the challenges facing children and grandparents can sometimes be overwhelming. Ed Gordon speaks with Donna Butts, executive director of Generations United, and Dorothy Jenkins, who raised three of her grandchildren all by herself in the South Bronx.