Accessibility links
A Solo Paul Weller Returns with 'As Is Now' British punk/soul/mod rocker Paul Weller's 30-year career included leading the seminal band The Jam, and the neo-soul outfit Style Council. He's had a solo career since 1992 and his new CD is called As Is Now. Day to Day music critic Christian Bordal shares his thoughts on the CD and on Weller.

Listen
A Solo Paul Weller Returns with 'As Is Now'

British punk/soul/mod rocker Paul Weller's 30-year career included leading the seminal band The Jam, and the neo-soul outfit Style Council. He's had a solo career since 1992 and his new CD is called As Is Now. Day to Day music critic Christian Bordal shares his thoughts on the CD and on Weller. 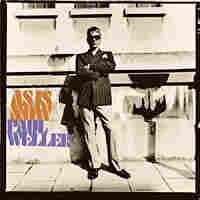 This is DAY TO DAY. I'm Noah Adams.

Coming up, how a ban on caviar is making life hard for the paddlefish.

ADAMS: British singer/songwriter Paul Weller's career has spanned 30 years and many pop styles. DAY TO DAY music critic Christian Bordal spoke with Weller during the singer's recent US tour, and he has this mixed reaction to the latest CD. It's called "As Is Now."

Mr. PAUL WELLER: (Singing) Can't nobody love you like I love you, yeah.

In his long career, Paul Weller has been all over the pop and rock music map. His first band, The Jam, was the most popular British punk band of them all.

BORDAL: The Jam played gigs with The Sex Pistols, The Clash, The Buzzcocks, but Weller says he's perfectly happy to have left those crazy days behind.

Mr. WELLER: The gigs were so violent at that time. I mean, every single gig around that time ended in a fight or some sort of kind of chaos or mayhem. So I don't really miss that.

BORDAL: In '82 at the height of their popularity, Weller broke up The Jam and started playing a sleek, chic synthesized take on American soul and R&B. With his new band, The Style Council, he helped usher in the '80s new wave sound of groups like the Eurhythmics.

THE STYLE COUNCIL: (Singing) I wish to stay forever letting this be my (unintelligible). Oh, but I'm caught up in a whirlwind of my ever-changing moods. Yeah.

BORDAL: Having been ahead of the curve both as a punk in the '70s and a new wave popster in the '80s, Weller today is all about looking back to the sound of the '60s, the mod bands, like The Small Faces and The Kinks.

Mr. WELLER: Definitely, yeah. I mean, that was kind of like my sort of formative years for me musically--from like '66 onwards for me. That's when I kind of really got into music as a kid, and I feel like first impressions always stay with you. That will always be the kind of foundation of what I do, I think.

Mr. WELLER: (Singing) What's in a life if you don't live it, baby? Just a gettin' by with the promise: What if? Maybe?

BORDAL: On his latest solo release, "As Is Now," Weller, true to form, runs very competently through a gamut of styles from blues rock to dance pop to hippie folk. There are nice touches in the playing and arranging throughout. But I sometimes find it hard to figure out why he's writing what he does; that musically and lyrically the songs can lack a coherent personality or a central voice. It's just, `Here's a love ballad. How about a dance pop tune? Now a '60s hippie folk song.'

Mr. WELLER: (Singing) I know it takes to start up a river. That's a long time.

BORDAL: One tune on this album that does seem to come from a more definite place is a song called "Savages."

Mr. WELLER: (Singing) Savages--he knows you are. Do you not think that God is looking down on savages? Children run to mothers. You put bullets in their backs.

What it's specifically written about basically--just that image for me of when the army went into the school, and the kids tried to escape and running out into the playground to their parents and being shot in the back by so-called freedom fighters. You know, I just thought--I don't know how much lower that mankind can sink to, really.

BORDAL: Weller's still a huge star in Britain, but through all these years he's been unable to grow beyond a devoted core following here in the US. In fact, he told me he didn't know if he could continue coming to the States to tour at all. He says he loses money every time he makes the trip.

Mr. WELLER: Because we've still got the same costs, you know: the trucks, your lights, you got wages, hotels, flights, da-da-dum. You know, it's never-ending. Those costs are all the same, but we're not making the same money back, you know. So often our UK tours finance everywhere else we play in the world.

BORDAL: Well, despite some of my quibbles with the latest album, don't give up on us yet, Mr. Weller. We hope to see you back here stateside a few more times.

Mr. WELLER: (Singing) Black French chicken on an empty dime. I only want what I know is mine. Sound the bells 'cause here's the good news.

Mr. WELLER: (Singing) Comments coming, going to wait no more. Can I get a piece for me?

ADAMS: More coming up on DAY TO DAY from NPR News.