Accessibility links
Parental Fears Snarl Efforts Against Polio Last March, Indonesia saw its first polio case in 10 years. Now, 300 children have been crippled and 60,000 infected. Before health officials can stamp polio out, they'll have to win over parents distrustful of the vaccine. 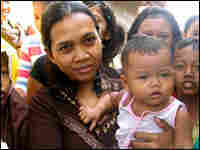 Ibu Asmuna believes that her 8-month-old daughter, Erlin, contracted polio from the vaccine. Health workers say Erlin must have been infected before she received her first dose. Such stories have fanned fears of vaccination among Indonesian parents. Joanne Silberner, NPR hide caption

Timeline: The Fight Against Polio

1894 The first known polio epidemic in the United States occurs in Vermont.

1932 Franklin D. Roosevelt is elected President of the United States.

1947 The University of Pittsburgh recruits Dr. Jonas Salk to develop a virus research program. Techniques Salk picked up while working with influenza are later used to develop the polio vaccine.

1948-49 Scientists confirm the existence of three strains of poliovirus.

1949 Dr. John Enders, Dr. Frederick Robbins and Dr. Thomas Weller develop a way to grow poliovirus in tissue culture, a breakthrough that aided in the creation of the polio vaccine. Their work earned the three scientists the Nobel Prize in physiology and medicine in 1954.

— Salk's former mentor, Dr. Thomas Francis, designs, directs and evaluates field trials of the polio vaccine. Unprecedented in their scope and size, the trials involve around 1.8 million children from the United States, Canada and Finland. They are among the first to use the double-blind process that has since become standard.

1955 On April 12, Francis announces the results of the field trials, declaring that Salk's vaccine is "safe, effective and potent."

1979 The last U.S. case of polio caused by wild poliovirus is reported.

1988 Worldwide, polio continues to affect some 350,000 people in 125 countries. In response, the World Health Organization, UNICEF, Rotary International and the U.S. Centers for Disease Control and Prevention launch the Global Polio Eradication Initiative.

1994 The Americas are certified polio-free.

1999 The U.S. Public Health Service recommends that the oral vaccine be discontinued in the United States, and a modified injectable vaccine becomes the preferred vaccine. The oral vaccine — which is cheaper and easier to administer — remains the vaccine of choice for eradication efforts elsewhere around the globe.

2005 As of Oct. 25, 1,414 cases of polio virus are reported worldwide, up from the 1,255 cases reported in 2004. Polio's resurgence in places such as Indonesia, where it had not been reported in a decade, is due in part to misinformation regarding the polio vaccine that has made parents in some developing nations reluctant to get their children vaccinated.

NPR Science Correspondent Joanne Silberner and producer Jane Greenhalgh reported on one aspect of the re-emergence of polio in Indonesia — the reluctance of some parents to have their children vaccinated. Several other factors are involved in the return of polio. Joanne Silberner describes them. 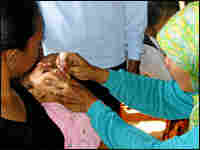 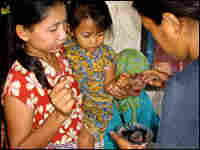 A health worker prepares to dip a young girl's finger in ink. Health workers use the ink marks to help keep track of the number of children vaccinated children in a given village. Joanne Silberner, NPR hide caption 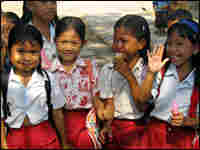 Indonesian girls on their way to school pause to check out the vaccination effort in their village. Jane Greenhalgh, NPR hide caption

Polio came so close to being eradicated two years ago that, in an effort to save money, some poor countries had cut back on vaccination. The disease made a comeback. Last March, Indonesia had its first new case in 10 years. Now, 300 Indonesian children have been crippled and 60,000 have been infected.

One of the major hurdles to getting rid of polio is parents who do not allow their children to be vaccinated. It's true with other diseases as well -- measles, for example.

Two women in Indonesia are trying to get that country back on track to eradicate polio. They're two young-looking grandmothers in baby blue baseball caps and UNICEF T-shirts. On National Immunization Day, they are a few hours' drive from modern Jakarta, in Banten province. Most of Indonesia's polio cases have occurred in Banten.

At a vaccination center in the small farming village of Suremin, Jane Nyanzee Magoba and Ibu Suranhni Nani see the problem immediately.

A mother is standing next to the vaccination post holding her baby. The baby's legs hang loosely from a pretty white dress with pink and white piping. A woman in a red dress flees past the bamboo huts down the hard-dirt alley.

It turns out that the mother of the baby in the white dress has told everyone around her that the vaccine gave her baby polio.

But the oral polio vaccine almost never causes polio. With wild polio cases in the area, these children are at a much higher risk when they don't get three or more doses of the vaccine.

Ibu Nani tells the mother her baby was infected before she got her first dose, but the woman is not convinced. There's been no polio for 10 years. The disease and the vaccine came at the same time.

After a few minutes, Ibu Nani gives up trying to convince the woman. She turns around to the health official vaccinating the few babies whose mothers have brought them in, and finds out they're nowhere near their goal: 37 children out of a target of 221 have been vaccinated.

The district health workers say it's time to go out into the narrow unpaved streets, so they all go. They come across a little shop, where there are a dozen women, many with babies on their hips. The midwife -- a member of the vaccinating team -- offers to immunize their children. But only one woman agrees. Ibu Nani plans on coming back tomorrow.

To Jane Magoba, resistance is nothing new. Once, when she was on a vaccination campaign in Nigeria, a man pulled a sword on her. At that time, religious leaders in Nigeria were telling people -- falsely -- that the polio vaccine was contaminated and would sterilize young girls. The polio virus spread quickly to surrounding countries, and eventually to Saudi Arabia, Yemen and on to Banten province.

The main road in Banten runs between a river and a canal. The canal is the center of social life. People bathe here. They wash their clothes and dishes. They scrub vegetables. They clean their teeth. And it's the same canal where women hold their babies to defecate.

Sitting near the canal, Jane Magoba pulls out a map and points to where the local cases of polio have occurred. She shows the map to women washing in the canal, then the river and the cases of polio. Anyone can see that the polio cases are very close to the river. She tells a woman washing her clothes in the canal that that the polio virus thrives in feces and can survive in water for several weeks or more.

But the woman says she's not worried about the canal -- there's been no virus back to the ancestors. Jane Magoba decides not to fight the ancestors, which makes it all the more important for her to convince the parents in the canal to get their children vaccinated. So she thanks them, and asks them to protect their children against polio.

Indonesia's polio outbreak began with one boy in March of this year. Health workers quickly started giving vaccine, but problems cropped up right away: Three children died. Indonesian newspapers and television stations blamed the vaccine. Months later, an investigation proved the deaths were unrelated to the vaccine. But meanwhile, worried parents had kept 1 million children from getting the vaccine.

Jane Magoba and Ibu Nani travel on to a nearby village, where things are going a little better. A man is announcing the National Immunization Day using the loudspeaker at the local mosque. Mothers and children are gathered on a porch around a worker from the local health center.

Their target is 80 children under the age of 5.

The health center worker pulls a vaccine vial out of a large, light blue cooler, while Jane Magoba and Ibu Nani encourage the mothers to come forward. The first baby, named Hicma, gets two clear drops of vaccine in her mouth. Each child gets shortbread cookies or chocolate wafers.

But one mother in line is reluctant. Her child is sick. Ibu Nani says it's OK. During the summer, a respected group of Indonesian doctors announced that sick children shouldn't get the vaccine. But that's not right. It is safe. Ibu Nani tells the mother the polio vaccine doesn't hurt sick children, but the mother still refuses.

The vaccinating team decides to go out into the village. After only an hour of giving vaccine at the immunization center, no more children show up. When Jane Magoba sees tiny pants and shirts hanging on clotheslines, she zeroes in. There may be children in the house. They find a few, and Ibu Nani is able to convince one mother with a sick child. She eases the process by cradling the baby's head.

But a lot of mothers still say "no." One tells them she has no child, even though the clothes on the line suggest otherwise. Ibu Nani says they'll keep trying…maybe the day after tomorrow.

The parents at this house have taken the child to a relative's to avoid the vaccinators. It's the same at the next house and the one after that. By the end of the day, the vaccinators are only up to 50 percent, because so many parents have taken their children out of the village.

The refusals are getting to Jane Magoba. Her brother in Uganda was crippled by polio when he was 3. She doesn't want to see other children suffering the same fate. She says she goes home with question marks. Was there something she missed? When a wild polio virus comes up, she feels so guilty.

Vaccine campaigns anywhere against any disease depend on parents allowing their children to be vaccinated. Jane Magoba says the problems she's seen in Banten are universal, and show why it's so difficult to eliminate polio. But she's very hopeful polio can be stopped in Indonesia.

Unfortunately, that's not good enough. The disease can still spread. New outbreaks have already occurred on the other side of the country from Banten, where the tsunami hit in Aceh province.

Jane Magoba's boss at UNICEF, John Budd, is worried. He says if the virus gets out of the country, it can infect any unvaccinated child anywhere.

Indonesia will hold another immunization day at the end of November, using a new, more effective vaccine that requires fewer doses. The fear is if that round isn't more successful, the virus will travel to other places that will have to struggle with it -- Malaysia, the Phillipines, Thailand, Vietnam. Ultimately a virus as infectious as polio could even spread to unvaccinated children in the United States.

The Campaign to Fight Polio in the Americas April 14, 2005
Polio Outbreak Crops Up in Indonesia May 3, 2005
Teams Strive to Immunize Against Polio in Nigeria March 1, 2005
Why Some Polio Immunizations Fails April 13, 2005
Salk Polio Vaccine Conquered Terrifying Disease April 12, 2005