Accessibility links
Fred L. Soper and Brazil's Alien Invasion In the 1930s, an ambitious young doctor set out to rid Brazil of mosquito that threatened to cripple the continent with malaria. The mosquito's landing in the Americas was billed as more dangerous than a Martian invasion. A look at one of the first global public health collaborations against malaria. 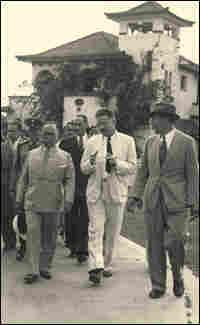 There's a long history of small bands of foreign medics and researchers arriving in remote locales to tackle infectious disease. Some, like those at the Doctors Without Borders health clinic in Egbebiri, Nigeria, are concerned with treating patients. Others try to combat disease by improving living conditions. There's another angle: fighting disease by destroying its agent.

NPR's Brenda Wilson spends a week with Doctors Without Borders, as they bring a new drug therapy to a malaria-stricken community in the Niger Delta.

In Brazil in the 1930s, an ambitious young American doctor, Fred L. Soper, set out to do just that. A mosquito called Anopheles gambiae had arrived there, sparking a severe malaria epidemic, Soper wrote his employer, the Rockefeller Foundation's International Health Division. If the mosquito weren't eliminated, Soper wrote, it would spread malaria -- a chronic, wasting disease -- throughout the country's workforce, crippling it. More importantly, if the gambiae mosquito, seen as a more efficient malaria carrier than other mosquitoes, weren't stopped in Brazil, it would rapidly spread malaria to the United States.

The threat of a U.S. epidemic was persuasive. Drumming up support for its campaign, the foundation declared: "If Orson Welles ... had announced not that the Martians had landed in New Jersey, but that a mosquito called Anopheles gambiae, a native of Africa, had arrived on the American continent, there would have been no public alarm.... But Anopheles gambiae is potentially a much more dangerous invader than the Martians."

Soper was also effective at convincing the Brazilian government to back his technical solution over other programs. Some in Brazil had argued that improving the living conditions of impoverished workers, or supplying quinine -- which eliminates malaria parasites from their human hosts -- would in the long run be more effective solutions. Soper countered that if Brazil didn't act now to stop the epidemic's spread by eradicating gambiae, everyone in Northeastern Brazil would be "on government relief next year." Soper was offering a quick, technical solution: Act now and save tomorrow.

The Rockefeller Foundation put up the funds, and the Brazilian federal government agreed to let Soper's team in, ordering its health personnel to cooperate with him. An army of uniformed health workers was deployed to drop larvicides in pools of water -- including cisterns for drinking water -- and fumigate houses, cars, trucks and boats where gambiae was found.

At the end of a year, Soper declared victory. The epidemic had ended, a direct result of his elimination of gambiae, he said.

But there was a slight problem. Malaria continued in the area. It turns out the region had not been malaria-free prior to the arrival of gambiae, as Soper claimed. In making a case for his particular public health strategy, Soper had ignored data that showed malaria, transmitted by a native mosquito, had existed in northeast Brazil decades before the arrival of gambiae and, at times, reached epidemic levels. A Brazilian doctor, Evandro Chagas, argued at the time that famine had made the malaria epidemic of 1938-1939 particularly deadly, not the presence of a new mosquito.

So what was the goal of Soper's campaign? Brazil was still stuck with malaria, but Soper argued that the eradication of gambiae stopped another, and potentially more effective, source of the parasite's transmission.

The elimination of the mosquito was used by Soper to support his claims that species eradication -- not just control -- was the best solution for fighting malaria worldwide. Soper and the Rockefeller Foundation were then able to use their "victory" in Brazil as a calling card to start mosquito-eradication programs in other countries. (This style of victory was not an unusual tactic for the Rockefeller Foundation's international health programs. In the 1920s, Rockefeller field workers declared they had rid Mexico's Tlaxcala region of hookworm. Unbeknownst to most, hookworm had never really been a problem there.)

And what did Brazil get? By allowing Soper and the Rockefeller Foundation into the country, Brazil's federal government found an outside funder to help fight its 1938 epidemic, and in the end, had one less mosquito to push it around.