Accessibility links
Developing Countries See Health Care 'Brain Drain' At a time when their countries most need them, physicians and nurses from developing countries are recruited in large numbers by Western countries, according to a recent study. 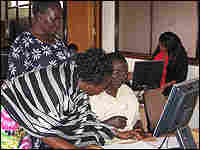 The African Medical and Research Foundation regularly holds classes for training all levels of health workers, from nurses to medical officers and midwives. The organization also hopes that it can persuade some of those it trains to stay in Africa. Brenda Wilson, NPR hide caption 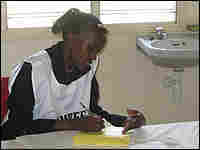 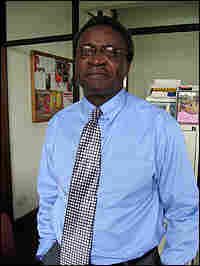 At the time of its Communist Revolution, China had few doctors to tend to its largely rural population. Mao Zedong's solution: a force of peasant workers trained in the basics of medicine. 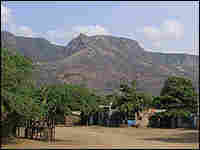 The village of Entasopia, 10 minutes away from Kenya's border with Tanzania. Brenda Wilson hide caption 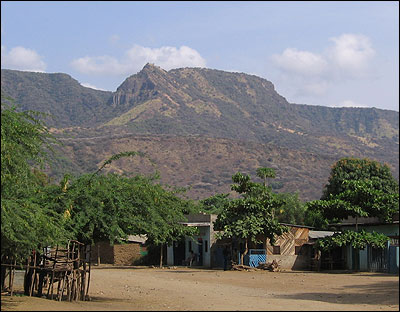 The village of Entasopia, 10 minutes away from Kenya's border with Tanzania.

At a time when their countries most need them, physicians and nurses from developing countries are recruited in large numbers by Western countries. A study published last week in the New England Journal of Medicine documented the brain drain that's going on in health care. It found that immigrants from India, the Philippines and Nigeria account for the largest number of foreign doctors working in the United Kingdom, the United States and Canada.

The shortage is complicating the fight against AIDS and other diseases. For example, there is only one doctor for every 10,000 people in Kenya. In many African countries, the scarcity is even greater.

Dr. Peter Ngatia, the director of curriculum development and training for the African Medical Research Foundation, says that part of the explanation is that in the competition for skilled health professionals, Africa is losing.

"It takes $150,000 to train a doctor here in Africa," Ngatia explains. "That doctor leaves after an internship, and Africa has lost not just a $150,000 but everything that goes with it. A person should be able to do their studies and go and work anywhere in the world. That is what globalization probably is all about. But by so doing, the weaker get weaker and the stronger, get stronger."

There are only 5,000 doctors from sub-Saharan Africa practicing in the United States. A small number for the U.S. but it represents a huge sacrifice in the developing world.

Physicians in Africa cycle out in what has been called a medical carousel that never turns full circle. They may start in South Africa, then move to the United Kingdom and on to Canada with their sights set on the United States. The last place on earth hardly any doctor wants to be is a small out of the way place in Africa.

About 10 minutes north of Kenya's border with Tanzania, in a Maasai village on the edge of a forest of tangled green, a 30-year-old woman is lying on a cushion on the floor of an ambulance.

She's been in labor since the previous morning. She was brought to the Entasopia Community Health Center by relatives, but will have to be taken to a hospital 40 kilometers away.

It happens every day in Africa, a woman in labor, unable to walk, and unattended by anyone who is trained to assist when complications develop. It's not unusual in such situations for a woman to be in labor for days, and what comes with it is one of the highest rates of maternal mortality in the world. Kenya ranks 154, near the bottom.

Because there are not enough doctors, the Entasopia center is run by a clinical officer. He's not quite a doctor, but more than a nurse, and he isn't trained to perform a cesarean section.

But this woman is in luck, because there is a truck to take her the 90 minute ride over stretches of boulder strewn roads and several streams, through the dusty unpaved desert of the Rift Valley to Magadi Hospital.

In all of Magadi, there are about four doctors for 500,000 people. Dr. Ngatia says such conditions led AMREF to push to revise the curriculum in Kenya's medical schools.

"We'll need doctors, but we'll not get one doctor for 10,000 people," he says. "But we can get another person, let's call him a medical assistant whom the Western people call a 'pseudo' doctor, a half doctor. They're not going to be certified for the medical council of the U.K. or the United States, but they're for Africa."

Clinical officers are the backbone of Kenya's health system. They run most of the health centers. They have some medical training: They know anatomy and can perform minor surgery and treat most of diseases, including AIDS. But they are not allowed to perform cesareans as clinical officers do in Mozambique, where a study shows they are just as proficient as doctors.

Dr. Festus Ilako, director of programs at AMREF, is a colleague of Ngatia's who personally finds these developments disturbing: "Me, I know if I was ill and I have a chest pain, I would see a chest physician or a cardiologist if I have to. And that's what everybody else would like, too. Let's not assume that the less-educated people want mediocre care."

But Ilako also acknowledges that in the interim, Kenya's poor and rural people will probably have to depend on clinical officers and community health nurses, also known as comprehensive health nurses because they have broader skills.

At Entasopia Health Center, things returned to normal after the truck carrying the woman in labor pulled away. And normally here, four nurses and a nurse midwife are preoccupied with 80 percent of the illnesses -- diarrhea, tuberculosis and malaria -- that are debilitating even when they don't kill.

One feverish child after another is examined by Charity Sokoi -- three in less than a half-hour. Sokoi, 28, is a mother of a 2 year old, and though she says she is committed to her work, she also speaks with longing of advancing her career in medicine.

"This is my home," she says. "But for me I should like to go for further study if I got the chance. It's only financial problems that are keeping us here."

But there's always the chance that she, like the young physician in a rural outpost in Africa, could be drawn somewhere else.