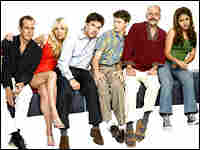 Some of the cast members who make up the Bluth family from Arrested Development. FOX TV hide caption

Mitch Hurwitz is the creator and executive producer of the TV series Arrested Development. The FOX show, which has won critical praise for its irreverently dysfunctional family; it has also won a handful of Emmy Awards.

Hurwitz, is also credited as a writer on the series, was also a writer and producer on the TV sitcoms The Golden Girls and The Ellen Show.

Arrested Development, now airing on Monday nights, is in its third season.