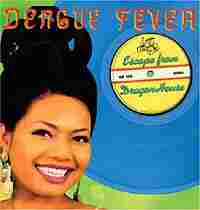 One Thousand Tears of a Tarantula

It's the second CD from the unique band, formed when five band mates discovered their lead vocalist, Chhom Nimol, singing at a nightclub in a Cambodian neighborhood of Long Beach, Calif.

Nimol, part of a family of famed musicians from Cambodia, only recently moved to the United States and her English-language skills are limited. But that hasn't limited the band's growing popularity.